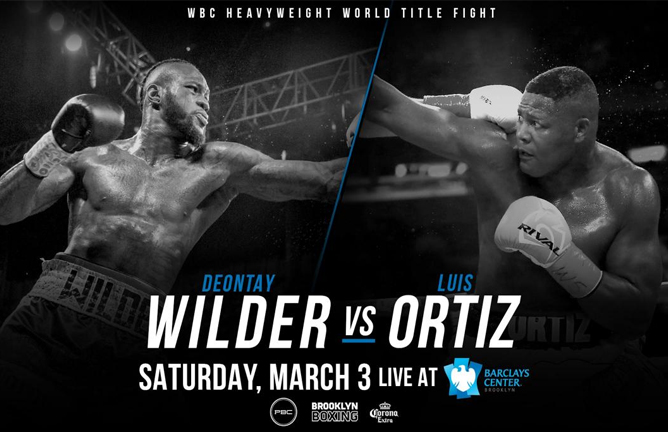 On Friday, it was officially announced that undefeated Heavyweight Champion Deontay Wilder (39-0, 38 KOs) would defend his title against undefeated Cuban puncher Luis Ortiz (28-0, 24 KOs) On March 3rd at the Barclays Center in Brooklyn, New York.

Wilder-Ortiz is the long-awaited matchup of undefeated, top-five fighters facing off in the resurgent heavyweight division and will be Wilder’s third appearance at Barclays Center. America’s only reigning heavyweight champion will look to put on another unforgettable performance when he faces his toughest opponent to date in Ortiz.

The fighters were scheduled to fight back in November but the fight was postponed when Ortiz failed a pre-fight drug test. Ortiz was replaced by Bermane Stiverne, who Wilder demolished in a single round of action.

The WBC investigated the test and they determined that Ortiz’s test failure was connected to his prescribed medication for high blood pressure prior to the fight.

Ortiz was in action in December where he knocked out Daniel Martz in the 2nd round in his first fight back from a 1-year layoff.

On Twitter, Wilder stated to his fans and to Ortiz, ” I don’t want no excuses this time…”.

Ortiz had this to say about Wilder. “He only talks about what he’s going to do, he does not talk so much that he’s bad, he still does not know what a train crash is, he has a problem and it will not be the (wacky) tobacco that the police took, it will be a problem between him and I alone in the ring, ”

With a hopeful showdown with Anthony Joshua who faces Joseph Parker a few weeks later, the heavyweight division is re energizing fans worldwide. Speaking on the Graham Norton show, Joshua said of his next opponent after Parker: “Deontay Wilder, he’s got a big mouth. Assuming both fighters win their respective fights in March, plans are set for a huge Las Vegas Heavyweight undisputed showdown.