Daniel Dubois rounded off his 2019 with another highlight reel early knockout win over the hapless Japanese, Kyotaro Fujimoto at the Copper Box Arena.

Dubois floored the visitor with a jab in the second round and although Fujimoto rose to his feet and survived the count, a brutal right hand from “DDD” flattened the Japanese, who crumpled on impact, and was in need pf medical attention.

It was an expected method of victory for Dubois, who will hope 2020 holds stiffer tests for him. One test could come in the shape of Joe Joyce, who was ringside for the main event and who Dubois exclusively called out when interviewed by Pro Boxing Fans.

Promoter Frank Warren said that there will be a big April show at the O2 Arena, that will feature Dubois. Joyce must first get past Marco Huck for the European Heavyweight title on January 11.

Williams powers past Fox to set up Andrade bout

Liam Williams impressed, and stylishly won his WBO Middleweight title eliminator with a fifth round stoppage of Alantez Fox, who had only previously lost to Demetrius Andrade on points.

Williams suffered a cut in the first round, but warmed into the contest, with the third and fourth seeing the Welshman utterly dominate.

A big right hand put the American down and he sustained a cut on his nose. Fox’s trainer threatened to pull his man out if the action remained so one-sided.

In the fifth, Fox lost a point for holding, as he desperately tried to cling on. Williams badly wobbled his opponent again, who tried to cling on to Williams’ waist as he went down once again, with referee Steve Gray forced to step in.

‘Showtime’ dominated the early rounds, although Braithwaite was in the argument in the early stages, but was constantly out boxed by the classier Edwards. Although he was dropped in the seventh, it was a flash knockdown, and the Croydon man got back to his boxing to comfortably see out the contest. 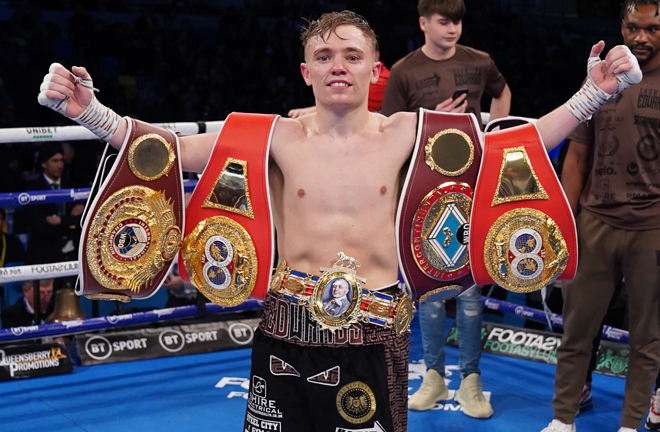 Archie Sharp didn’t have things his own way, but still had too much to outpoint Latvian, Artjoms Ramlavs in defence of his WBO European Super Featherweight belt.