It’s a high class welterweight match-up that tops a stacked card at the AT&T Stadium in Arlington, Texas, as we could be a step closer to a clash of pound for pound stars by the conclusion.

Errol Spence Junior (26-0, KO21) returns to action after over a year out to defend his WBC and IBF 147lb titles against respected former two-weight world champion, Danny Garcia (36-2, KO21).

The ultimate goal for boxing fans would be to see Spence face WBO champion, Terence Crawford, in what would be a mouth-watering clash.

Firstly though, Spence must deal with inactivity and a tough opponent in Garcia before even thinking of the super fights.

Spence has matured into a dominant champion since ripping the IBF belt from Kell Brook in Sheffield back in May 2017, and makes the fifth defence of that title in Texas.

Prior to defeating Brook via eleventh round stoppage, Spence had dealt with respected contenders such as Samuel Vargas, Chris van Heerden and Chris Algieri in good fashion, winning all via the early route.

Post Brook, Spence made a first defence in retiring Lamont Peterson in seven to make a statement, and backed that up by knocking out Carlos Ocampo in a round in June 2018.

A clash of big vs little went the way of Spence in a 12 round rout of Mikey Garcia in March 2019, with Spence winning every round, and he was last seen adding the WBC crown to his collection by defeating Shawn Porter via split decision in September of the same year.

A month later came disaster though, as Spence drove while under the influence of alcohol, and crashed his Ferrari at high speed, fortunately only suffering minor injuries in the process. He also escaped prison, and has since had near 15 months away from the ring.

Spence’s latest test comes against a man whose main successes have come at super lightweight, and at 32, Danny Garcia will be looking to re-establish himself as a top level operator.

After a spell as a top prospect, Garcia stepped out of the shadows and claimed the vacant WBC ten stone belt with a wide win over Mexican legend, Erik Morales in March 2012.

He added the WBA (Super) title in his next fight, flattening Amir Khan in four in Las Vegas.

Garcia knocked out Morales in four in a rematch, before dropping and outscoring Zab Judah in April 2013.

Further defences followed against Lucas Matthysse and Mauricio Herrera, but Garcia seemed to have outgrown the weight, moving up to Welterweight after two more ten stone wins.

After stopping Paulie Malignaggi in nine, Garcia became a dual weight world champion with a clear points win over Robert Guerrero for the vacant WBC title.

A non-title win over Samuel Vargas (TKO7) led to a unification clash with Keith Thurman, but Garcia was handed a first defeat in a split decision loss to ‘One Time’.

It’s been largely uninspiring stuff since from the Philadelphian, with a comeback stoppage win over Brandon Rios proceeding a second loss in an unsuccessful challenge for Shawn Porter’s WBC strap in September 2018, losing on the cards.

Garcia has rebuilt at a lower level, knocking out Adrian Granados in seven in April 2019, and his last fight saw him outpoint Ivan Redkach in January of this year.

Prediction: Much will be focused on what Spence’s high profile crash has taken out of him if anything, and he will be keen to remind the welterweight world as to just how good he is.

Garcia hasn’t shone at welterweight as much as he did at ten stone, and hasn’t looked near to his best in recent outings.

I think Spence will keep this one on his terms, and can box and do what he needs to in order to take a clear and deserved win on the scorecards.

A featherweight 12-rounder has been hastily arranged, as former world title challenger, Julio Ceja, tested positive for COVID. Eduardo Ramirez (23-2-3) was due to be his opponent in a Mexican derby, but Miguel Flores (24-3, KO12) returns after a points loss to Leo Santa Cruz last time out to face Ramirez.

Ramirez has also failed in a bid for world honours previously, against Lee Selby at the back end of 2017 for the IBF belt, losing on the cards. He was last seen in November 2019, stopping Leduan Barthelmy in four in a rematch of their 2017 draw.

Prediction: This could be a better contest than the original, but I lean towards Ramirez to take a decision on the cards.

22-year-old Fundora will face a real test against Cota, who took Jeison Rosario to a split decision in April 2019, and also shared the ring with Jermell Charlo two months later, losing in three.

Both hold high knockout percentages, but Cota has mixed in much higher class, and can win this one inside schedule.

Josesito Lopez (37-8, KO20) continues to campaign, and has only lost mainly in elite class, and here he meets Francisco Santana (25-8-1, KO12) over ten at welterweight in what is surely a crossroads clash.

Both have been in with quality operators, but Lopez should have enough in the tank for a points win.

In the scheduled eight-rounders, Fernando Garcia (13-2, KO8) should be able to outscore Juan Tapia (9-3, KO3) at featherweight, whilst at lightweight, Frank Martin (11-0, KO8) can score another early win against Tyrone Luckey (12-12-4, KO8) who has been stopped eight times.

Finally, there are also two six-rounders. Vito Mielnicki Junior (6-0, KO4) will likely need to go the distance to beat Steven Pulluaim (5-2, KO1) in their welterweight clash, while at super middleweight, Burley Brooks (6-0, KO5) can see off Marco Delgado (6-1, KO5) inside schedule. 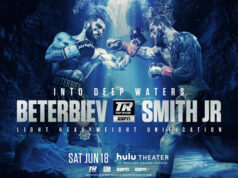