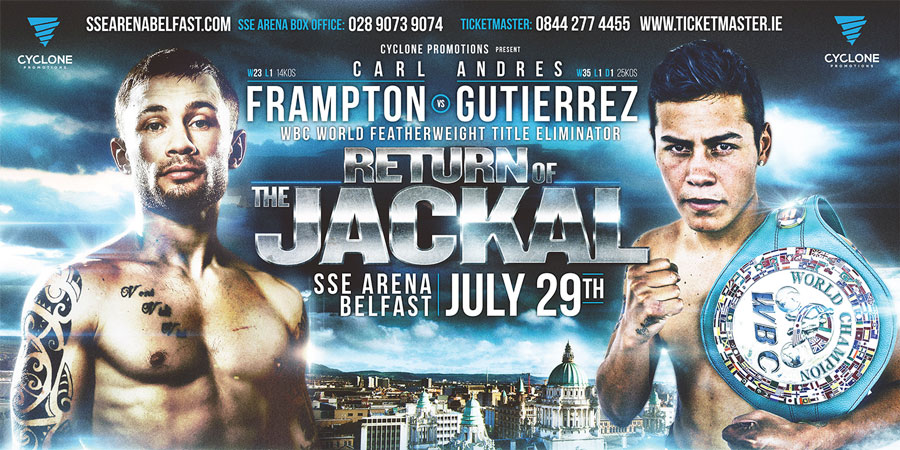 Carl Frampton believes it could be the right time for him to face IBF Featherweight champion, Lee Selby, to create an all British battle.

Frampton, takes on Andres Gutierrez in Belfast this weekend, the first time he returns home for a fight since his loss to Leo Santa Cruz back in January. The ‘Jackal’ isn’t overlooking his opponent, Gutierrez, but does feel a win over his opponent this weekend will fuel for a title fight with Selby.

Speaking on his Sunday Life column, Frampton spoke of Andres Gutierrez and Lee Selby. “I’m not looking past Gutierrez in any shape or form but it’s natural for people to look at the two of us and want to see the fight happen – in the same way that they wanted to see me fight Scott Quigg at super-bantamweight.”

Frampton was ringside for Lee Selby’s victory over Barros and admitted he would not have been able to fight as Selby did, a few days after his mother had passed.

“Selby did the business when he retained his IBF world featherweight title and all credit to him for doing it just a few days after his mother had passed away. I don’t think I could have gone in and fought but he did and beat his mandatory challenger Jonathan Barros and afterwards he was talking again about a fight with me and that’s one that I would be up for. The timing would seem to be right for the fight.

Though Frampton has options for his next world title fight, a clash with Selby interests him and British fans of boxing. “Selby isn’t the only option I would have in terms of a world title shot but the all-British battles do create a lot of interest. Selby is a boxer who I’ve always respected and I know how hard it would be. All being well this Saturday, I expect to be fighting again before the end of the year so I can finally enjoy Christmas for the first time in years and a world title fight with Selby would be perfect.”

Carl Frampton takes on Andres Gutierrez on the 29th July 2017 at the SSE Arena in Belfast in a WBC world featherweight title eliminator match.