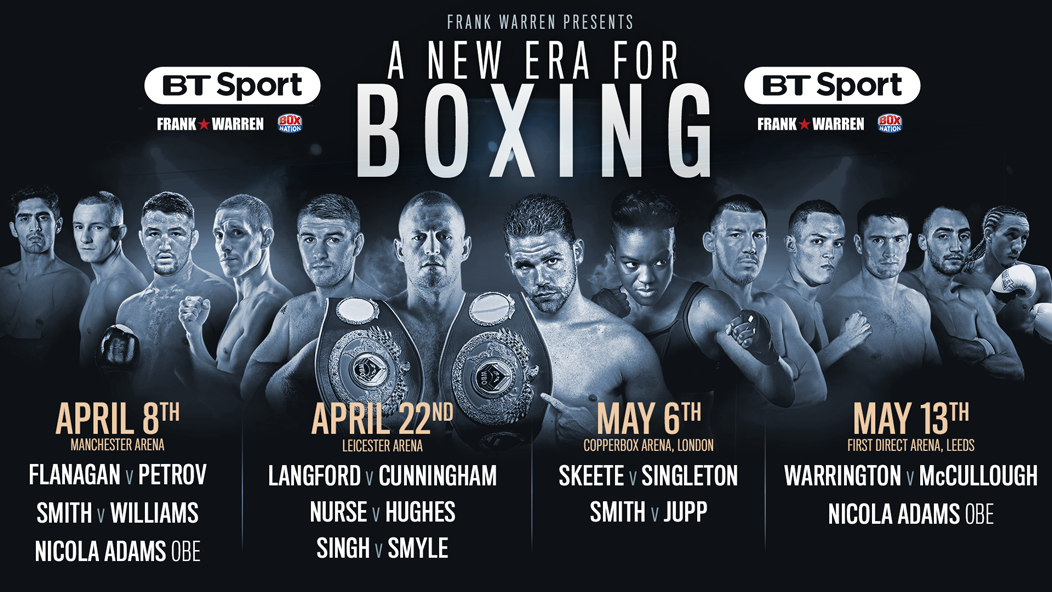 At a London press conference today, Hall of Fame Promoter Frank Warren and his new broadcast partner BT Sport announced initial details of the first four events to be broadcast on both BT Sport and BoxNation.

Taking place at London’s iconic BT Tower, the press conference was hosted by BT Sport presenter Paul Dempsey alongside Mr Warren, as the pair unveiled details of the upcoming schedule which would signify the broadcasters first steps into live boxing.

Warren announced that the first event to be shown on both BT Sport and BoxNation will take place at Manchester Arena on Saturday April 8thand would feature a blockbuster card headlined by Terry Flanagan’s WBO World Lightweight Championship defence against Russia’s Petr Petrov.

The biggest news of the day was the unveiling of Olympic Gold Medallist Nicola Adams as Warren’s latest signing to join his ‘New Era’ on BT Sport. During her unveiling it was announced that she would make her pro-debut on the April 8thManchester card.

The next event of Warren’s opening BT Sport schedule, will take place at the Leicester Arena where newly crowned British Middleweight Champion Tommy Langford will make the first defence of his belt against Birmingham rival Craig Cunningham on Saturday 22nd April.

Ranked at number two in the World by the WBO, undefeated Langford outpointed Sam Sheedy to claim the Lord Lonsdale belt in November whilst Cunningham is coming off the back of a career best stoppage win against London 2012 Medallist Anthony Ogogo.

Also on the card Tyrone Nurse will make the third defence of his British Super-Lightweight title against Malmesbury’s Joe Hughes whilst Indian superstar Vijender Singh will fight in the city which boasts a huge British Indian population against Leicester’s own English Super Middleweight Champion Jahmane Smyle.

The next card announced by Warren will take place at London’s Copper Box Arena on Saturday 6th May. Mr Warren mentioned the card is set to have some further additions but will feature Bradley Skeete’s mandatory British Welterweight Title defence against Shayne Singleton.

Also on the bill, British Featherweight Champion Ryan Walsh will make the third defence of his title. The all-action Cromer fighter stopped Scotsman Darren Traynor in his first defence before halting highly-rated Belfast man James Tennyson in his second defence of the title at the Copper Box Arena last April. Whilst the talented Mitchell Smith will be given the chance to avenge his shock loss against George Jupp.

The BT Sport cameras will then travel to Leeds’ First Direct Arena the following weekend on Saturday 13th May where local hero Josh Warrington will top the bill in front of his famously huge support against Marco McCullough.

The undefeated WBC International Featherweight Champion Warrington is already the flag-bearer for boxing in his city and is now aiming to cement his place for a World Title challenge later in the year.

Also on the card, women’s boxing’s biggest star Nicola Adams OBE will make a hero’s return to her hometown where she will fight as a professional for a second time as she aims to fast-track towards a professional Word Title.

Details of exciting further card additions to all four events and other high quality schedule additions will be announced at regional press conferences in the coming weeks, alongside ticket details for each event.

IMG agrees deal with AIBA to distribute AIBA Men’s World Championships, the Continental Championships and the World Series of Boxing in 2017

IMG, a global leader in sports, events, media and fashion, today announced that it has reached an agreement with the International Boxing Association (AIBA) for the sale and distribution of the worldwide broadcast rights for its events in 2017, including its flagship World Championships.

The deal will see IMG distribute more than 30 hours of live content from the AIBA Men’s World Championships in Hamburg, Germany next September, while it will also sell rights to the AIBA Continental Championships and the World Series of Boxing.

The agreement is an extension of IMG’s existing relationship with AIBA, which helped AIBA distributed the global rights to the APB/WSB Olympic Qualification Tournament in July.

Kristian Hysen, Vice President and Head of Boxing, IMG Media, said: “We are delighted to be working with AIBA again and expanding our boxing portfolio with these properties. With 280 fighters from 80 countries competing at the World Championships, the Continental Championships being hosted across four different continents, and the World Series of Boxing producing over 100 hours of content, all three events have become an attractive proposition to broadcasters and fight channels on a global scale.”

Dr Ching-Kuo Wu, President, AIBA said: “We are very satisfied with the agreement, which will ensure that AIBA competitions will reach a worldwide audience. We are working hand-in-hand with all our partners from production to delivery to ensure the spectator experience provides the best possible boxing spectacle for our fans.”