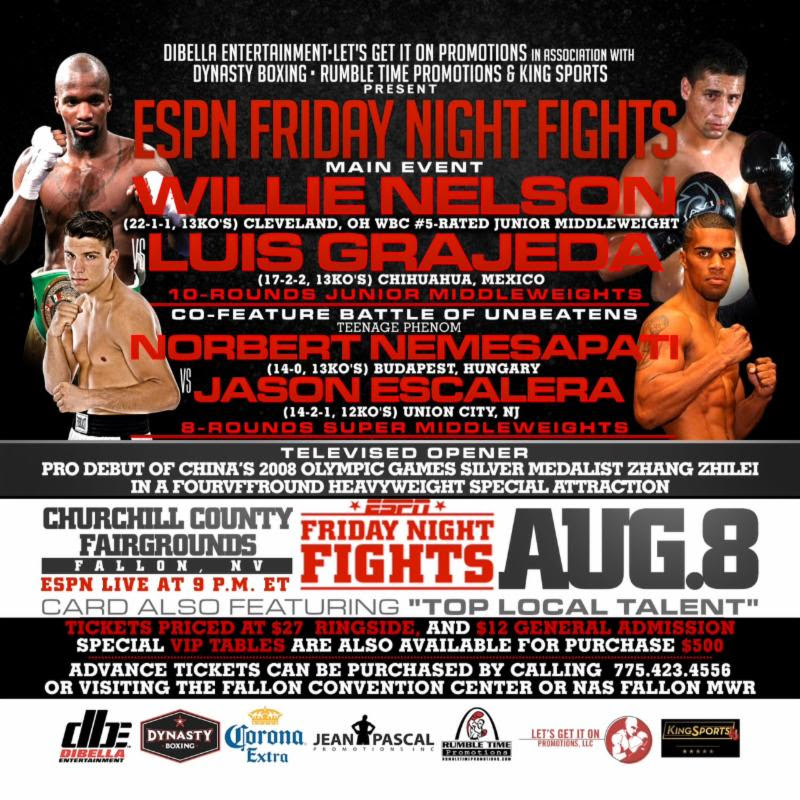 This Friday night, world-class boxing returns to Fallon, NV, when this week’s edition of ESPN Friday Night Fights heads to Churchill County Fairgrounds, just outside of Reno. Headlining the card will be top-rated junior middleweight contender Willie Nelson (22-1-1, 13KO’s) taking on the hard-hitting and dangerous Mexican Luis Grajeda (17-2-2, 13KO’s) in the 10-round main event.

In the co-feature, fast-rising 18-year-old phenom Norbert Nemesapati (14-0, 13KO’s) will be looking to make a splash in his US debut when he faces fellow knockout artist Jason Escalera (14-2-1, 12KO’s) in an eight-round super middleweight matchup. 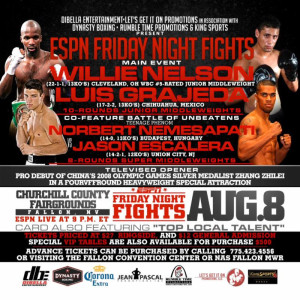 Opening up the card will be the highly anticipated pro debut of China’s 2008 Olympic Games silver medalist Zhang Zhilei, in a four-round heavyweight special attraction when he squares off against Curtis Lee Tate (7-4, 6KO’s).

Also seeing action on the card will be highly regarded undefeated prospect Joel Diaz Jr. (16-0, 12KO’s) challenging the once-beaten Kevin Aguilar (8-1-1, 2KO’s) in an eight-round super featherweight matchup. The 22-year-old Diaz, a training stable-mate of middleweight champion Gennady Golovkin, is as good a young prospect as there is in boxing and is fresh off of his exciting and dominant 10-round unanimous decision victory over Canadian prospect Tyler Asselstine (14-1) on ShoBox in May of this year. Look for another impressive performance out of the DBE/Jean Pascal Promotions-promoted Diaz on Friday night.

Undefeated middleweight prospect Eduardo Alicea (7-0, 3KO’s) is also scheduled to appear on the card when he competes against fellow undefeated Kirk Huff (3-0, 1KO) in a six-round middleweight matchup. Trained by Robert Garcia and promoted by DBE and Rumble Time Promotions, Alicea, the former Junior Olympics National champion and #1-rated US amateur, has continued to impress with each outing and is already 3-0 in 2014.

Rounding out the card will be a battle for bragging rights when hometown favorite Oscar Vasquez (6-1, 1KO) squares off against fellow Nevada-native Sergio Lopez (2-1-1) in a six-round flyweight matchup.

Tickets are currently on sale and are priced at an extremely affordable $27 ringside and $12 general admission. Special VIP tables are also available for purchase at $500 each. The VIP tables accommodate seating for eight guests at ringside and include a complimentary bucket of beer, executive suite restrooms, cocktail service, a dedicated full service bar, food station and a Fallon Fights souvenir for each guest. Advance tickets can be purchased by calling (775) 423-4556 or by visiting the Fallon Convention Center or NAS Fallon MWR. You can also purchase tickets by emailing info@visitfallonnevada.com.