Francisco Fonseca was supposed to be a significant step up in class for Ryan Garcia in their main event clash at the Honda Center in Anaheim, California, live on DAZN.

I just prayed he got up 🙏 20-0 pic.twitter.com/bOmGQbmAuF

The 21-year-old phenome made short work of Fonseca instead, knocking him out cold with a picture-perfect left hook in just 80 seconds.

Garcia (20-0, 17 KOs) started strong stunning Fonseca (25-3-2, 19 KOs) with a short left hook followed by several more hooks. Garcia was undoubtedly looking for the knockout, which he found moments later as Fonseca attempted to land a right hand but was countered with the left hook.

“You gotta beat me to become champ,” he added. “Let’s make it happen.”

Garcia agreed that the two should meet but announced that he would be fighting Jorge Linares next at the Staples Center in Los Angeles. Linares fought earlier in the co-main event scoring a fourth round knockout over Carlos Morales.

Garcia went further to express an interest in fighting Luke Campbell, Gervonta Davis and then Haney. Haney is still recovering from shoulder surgery and probably will not be available until July.

The man with over 4 million Instagram fighters has proven that he not just another hype job and future opponents will have to be wary of his skills as well as fight-finishing power.

Garcia landed just 7 punches but that was all he needed to get the job done as evidenced by the vicious left hook that dispatched Fonseca. Friday night’s blowout marked Garcia’s fourth consecutive knockout and the biggest win of his young career.

It was an emphatic victory for the Venezuelan, who worked behind a stiff jab and repeatedly scored with quick rights to the head all night in their exchange. Linares improves to 47-5 (29 KOs) while Morales falls to 19-5-4 (8 KOs).

The three-division world titleholder had come under increased scrutiny in recent years following a shocking knockout loss to Pablo Cesar Cano at the beginning of 2019. He rebounded eight months later with a clear decision win over Al Toyogen in Tokyo.However, the stench of that bad defeat lingered causing boxing fans to wonder whether the 34-year-old still belonged among the top fighters within the talented lightweight division.

The opening round was largely uneventful except for a cut Linares suffered over his left eye from an accidental head clash with Morales. The injury had zero effect on Linares though and the action was allowed to continue.

Linares began to find his range and establish distance in the second to help setup the spectacular finish.

Morales would be dropped face-first to the canvas courtesy of a brilliant right cross from Linares toward the end of the third. The Mexican gamely rose to his feet to beat the count though.

Linares connected on a jab to the body followed by a crushing right hand to the head. The shot sent Morales sprawling to the canvass and almost through the ropes. Referee Thomas Taylor had seen enough and wisely stepped in to stop the fight at the 2:09 mark. 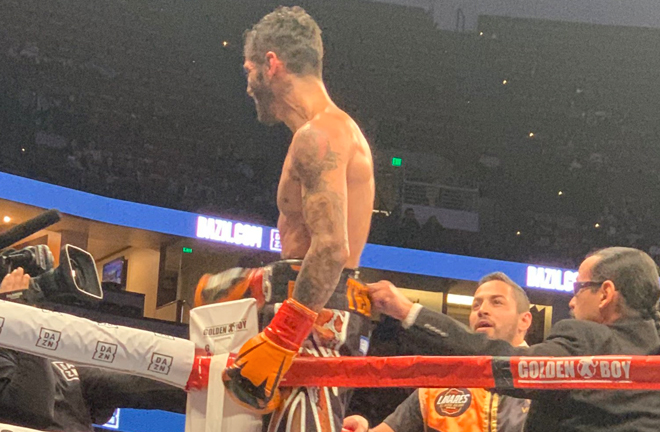 Linares was simply too fast and sharp for Morales, who is not an elite, world-level fighter. The victory was still impressive because Linares methodically took Morales apart and became the first man to stop him.

Linares beamed with excitement in his post-fight remarks on the win.

“I can demonstrate even more than that,” Linares said through a translator. “I’m ready for the best boxers right now. I’m back at 135 pounds. My brother is now my trainer, and I now I’m ready to show my best. I’m better than ever in my career right now.”

That excitement has everything to do with his potential showdown with Ryan Garcia, who blasted out Francisco Fonseca within a mere 80 seconds in the main event. The two will likely face each other this summer in an exciting matchup between a savvy ring veteran with some vulnerabilities against an untested young boxer-puncher.