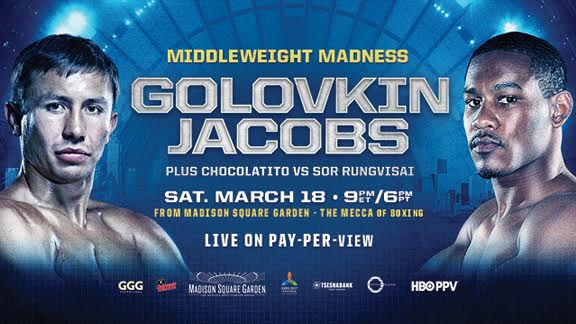 The highly-anticipated championship blockbuster between middleweight kingpin and one of the world’s very best pound-for-pound stars Gennady ‘GGG’ Golovkin and WBA champion Daniel Jacobs will be shown exclusively live on BoxNation on Saturday March 18th.

The seismic showdown at the iconic Madison Square Garden will pit two of boxing’s biggest punchers against one another as the undefeated Golovkin faces his toughest test to date against mandatory challenger Jacobs.

Unified champion Golovkin will be looking to continue his reign of terror over the 160-pound division as he aims to overcome 30-year-old Jacobs to add to his impressive string of victories which has seen him collect the WBC, WBA ‘Super’ and IBF titles along the way.

36 men have heartily tried to dethrone the Kazakh king and all 36 have returned battle weary and defeated – 33 of those brutally by knockout.

But in Jacobs there lies a man who is ready to lay his claim to the middleweight kingdom and depose Golovkin in a similarly savage manner as those who have previously rebelled against the 34-year-old’s rule.

Jacobs’ impressive résumé has seen him win all but one of his 33 fights, with 29 of those coming by way of knockout.

His 2015 destruction of the much respected Peter Quillin ranks high on his list of wins and Golovkin will be well aware that he is unlikely to have things all his own way when they clash in what is sure to be an edge-of-the-seat-thriller.

The victor of this fight will hold all the belts at middleweight except the WBO version, which belongs to Britain’s skilled and undefeated Billy Joe Saunders, who will no doubt be gunning for the winner.

“I love fighting at Madison Square Garden, it feels like my second home”, said Golovkin. “Danny is a great fighter, one of the best middleweights and a big test for me. I look forward to another ‘Big Drama Show’ in New York City.”

Stated Jacobs: “I’m excited about facing Gennady and proving I’m the best middleweight in the world. On March 18th I’m bringing all the belts back to Brooklyn with me.”

“We’re very excited to promote this outstanding matchup of the two best middleweights in the world, Gennady Golovkin and Danny Jacobs,” said Tom Loeffler of K2 Promotions. “It doesn’t get any better than this, the world middleweight championship at ‘The Mecca of Boxing’ – it’s truly going to be a memorable evening.”

Jim McMunn, BoxNation Managing Director, said: “We are delighted to be able to showcase this much anticipated middleweight world title clash exclusively live on BoxNation. This is without doubt one of the very best fights of the year, with BoxNation subscribers getting the chance to see one of the world’s elite fighters in Gennady Golovkin as he takes on a very dangerous champion in Daniel Jacobs. These are two guys who can bang and are known for getting the job done in spectacular fashion – it is a battle not to be missed!”