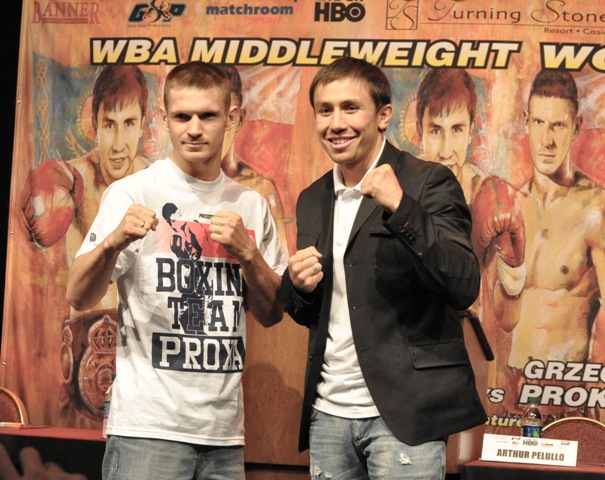 On Thursday afternoon the final press conference was held at the Showroom at The Turning Stone Casino Resort for Saturday Night’s HBO Boxing After Dark card that will take place in the Events Center. In the main event, WBA Middleweight champion Gennady Golovkin will defend his title against European champion Grzegorz Proksa. In the co-feature, former WBO Jr. Middleweight champion will battle undefeated Puerto Rican Jonathan Gonzalez. Below are quotes from the fighters and promoters involved in the card. 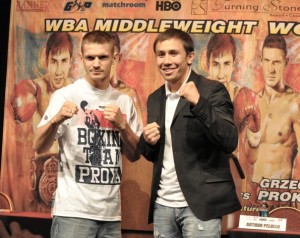 “This is a show with two compelling fights.  The co-feature is a turning point for both fighters.  One has been there and the other is trying to get there.”

“Proksa is a good boxer and very strong.”

“This is my dream to fight in America.”

“We anticipate a very difficult fight.”

“This coming Saturday is a realization of a dream for Gennady to defend his title in America.  We Give Grzegorz credit for wanting this fight.  Both guys are big punchers.”

“15 years ago when I started to box, this was my dream to fight for the championship. I know he is a top level boxer and I am excited for this fight.”

“Grzegorz has a great opportunity and I am sure he will make the best of it.”

“I will show what I can do on Saturday and this will be a wonderful show.”

“Saturday will be another hurdle that I will get over”

“We believe that Jonathan is the next Puerto Rican Superstar.”

“It doesn’t get much bigger then a world titlefight on HBO.  The main event has Fight of the Year written all over it.  The co-feature should be non-stop action deserving of a world title shot.  In the next eighteen month, Tony Luis should be fighting for a world title”