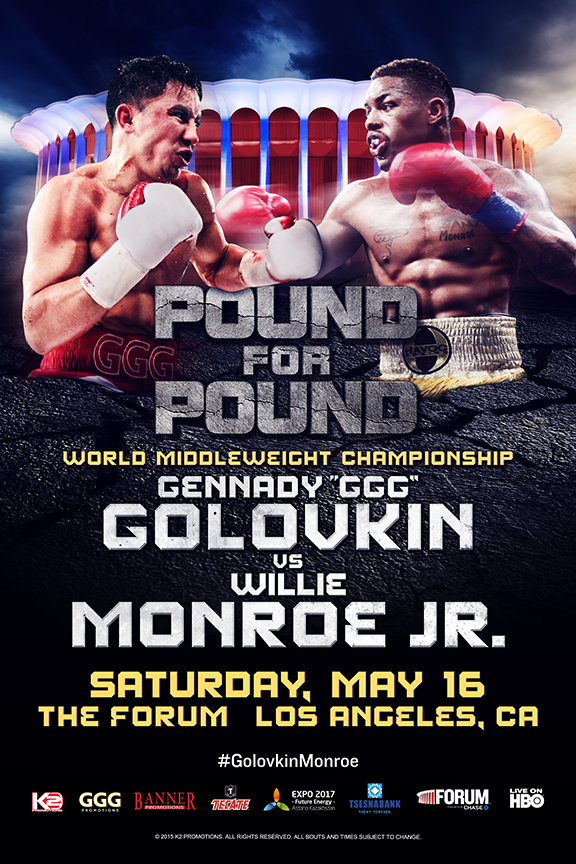 Tickets will go on sale today March 17 at 3:00 p.m. eastern for the Gennady Golovkin vs. Willie Monroe Jr. fight set for Saturday, May 16 at the Forum.

Priced from $30-$300, tickets will be available through Ticketmasterand at the Forum Box Office. 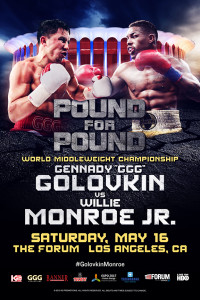 “Starting at $30, we’ve priced the tickets very reasonably to give as many fight fans as possible the opportunity to see “The GGG Big Drama Show,” said Tom Loeffler of K2 Promotions. “As his last fight in Los Angeles was sold out, we encourage fans to purchase their tickets early.”

The first 100 fans purchasing tickets at the Forum Box Office this Tuesday starting at 12:00 p.m. will have an opportunity to have a photograph taken with “GGG” on the press conference stage starting at 1:00 p.m. at the famed venue.

The Forum is located at 3900 W. Manchester Blvd., Inglewood, CA 90305. The Box Officecislocated on the West Side of the building, parking can be accessed through the S. Prairie Ave. entrance.

Presented by K2 Promotions and GGG Promotions in association with Banner Promotions and the Forum, Golovkin vs. Monroe will be televised Live on HBO World Championship Boxing® beginning at 10:00 p.m. ET/PT.

Golovkin, 32-0-0 (29KO’s) of Los Angeles, California via Karaganda, Kazakhstan will make the 14th defense of his title against top rated challenger Willie Monroe Jr 19-10 (6KO’s), of Ithaca, New York on Saturday, May 16 at The Forum in Inglewood.

On February 21 in Monte-Carlo, Golovkin stopped Martin Murray for his 19th consecutive win by knockout, the most in the history of the middleweight division. This will be Golovkin’s second fight in Los Angeles, having stopped former world title challenger Marco Antonio Rubio on October 18, 2014 before a record setting crowd of 9,323 at the StubHub! Center in Carson, CA.