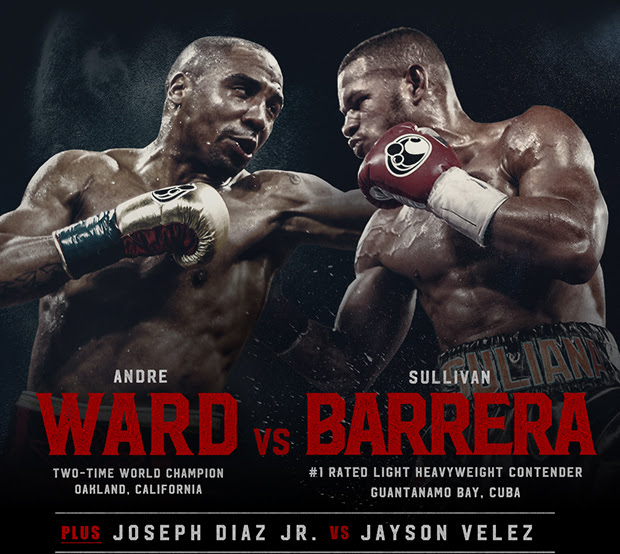 Making his 2016 debut before a hometown crowd, Andre Ward (28-0, 15 KOs) moves up to 175 pounds to battle Cuban native Sullivan Barrera (17-0, 12 KOs) of Miami, Fla., in a light heavyweight bout scheduled for 12 rounds. Ward, 32, has succeeded at every level, compiling a nearly perfect record as an amateur, winning a gold medal in the light heavyweight division at the 2008 Olympic Games in Athens and enjoying a seven-year reign as super middleweight champ. This will mark Ward’s sixth fight at Oracle Arena and fifth on HBO.

Barrera, 34, is also unbeaten and holds a three-fight knockout streak. Since his 2009 pro debut following a standout amateur career in Cuba, he has fought nearly all his bouts as a light heavyweight, which should give him an advantage over the shorter Ward. Barrera will be making his HBO debut, having previously appeared on HBO Latino.

In the evening’s co-feature, Joseph Diaz Jr. (19-0, 11 KOs) puts his undefeated record on the line against Jayson Velez (23-1-1, 16 KOs) in a featherweight contest scheduled for ten rounds. Rising prospect Diaz, 23, is coming off a busy 2015 in which he logged five impressive wins, and will be making his HBO debut. Velez, 27, looks to rebound from his first professional loss, to Ronny Rios in November. Appearing on HBO in 2014, Velez battled Evgeny Gradovich to a split draw in his first world title shot.

“I feel good and I am ready to go. I’m peaking at the right time. I’m just excited to get it on Saturday night.

“I used to drive by Oracle Arena on 880 as a kid on my way to King’s Gym and wonder if I could make it there one day and [trainer] Virgil [Hunter] used to say with confidence, ‘You’re going to headline there.’ As I got older, I used to go to some of the cards put on in the arena. I was still an amateur and I would just dream. Next thing you know, in 2009, I was in a sink or swim fight against Edison Miranda. If I won, there was probably a good chance that I would get a title shot and the rest is history. Here we are again, it’s my 7th time at Oracle and it’s still a blessing.

“It was the right time to move to light heavyweight. It was a combination of not having the right guys to fight or guys that didn’t want to fight me. I want to be great. These are the types of moves you have to make. I’m a student of the sport and when I study the sport, this is what greats have always done. They move up. The great ones find a way to get it done and I want to be in that conversation.

“Barrera is a big body. He’s confident. Seems to be a good puncher. We did not pick him because he’s a soft touch. We picked him because he was going to get me ready and show me what this weight class is all about. If you look at my career, there’s a place for tune-ups which I haven’t had a lot of. You want to fight the best and if you aren’t fighting the best, you want to fight the number one contender. That’s what we’re doing.

“I think I am evolving into an efficient fighter. I’m moving when I have to move. I think that’s the beauty of any athlete who doesn’t abuse his body and really takes his craft seriously. I’ve seen some articles claiming I missed my prime. It’s crazy to me. I feel that I am as good as I have ever been. I’ve been in a boxing gym without much of a break for the past 20 years. My brain thanked me for the last two years. My body thanked me. It might give me another two years in my career.

“I have to just be me. Who I am is enough. I don’t have to show up for Kovalev in the crowd on Saturday night. We just have to implement the game plan. I think that’s going to send the message it’s supposed to send and if it doesn’t, then he’ll [Kovalev] get the message when we fight.

“I’m stronger than Ward. I have the Cuban background and I learned a lot of skills there. More than anything, the determination to overcome anything in front of me will help me defeat Ward on March 26.

“Whatever Ward has, I will adjust to it and overcome it.

“I know Ward and Kovalev are very highly respected and they create a lot of money and a lot of interest, but they don’t know what Sullivan Barrera is capable of doing. I will prove that on Saturday.

“I’m not really a guy that has to look for a knockout. My boxing skills speak for themselves. I am fighting Andre Ward and fighting here in Oakland, so I don’t think a decision will be rendered in my favor.

“To all the fans, especially the Cuban fans that have supported me please know that come Saturday, I am going to do everything I have to do to come out victorious.”

“I can’t expect what Jayson did to Ronny Rios during this fight. I’ve got to go in there, test him out and adjust when I am in the ring.

“If the opportunity presents itself where he’s hurt and I see that my punches are overwhelming him, then of course I’m going to get in there, be aggressive and make sure I take him out as early as possible.

“I really want to make a statement this fight. I want to show the world that Joseph Diaz could be the next big thing in boxing, so I trained very hard to put on a great fight for the fight fans, be very aggressive and make it a war in there. I hope that Jayson Velez is 110% ready because I want him to be at his best.

“If I win this fight and make a statement, I think I can move to contender status and hopefully get a world title shot by the end of this year. I want to fight tough opponents this year because I want to show the world who I am.

“I feel like a beast when I step into the ring and I can see it in sparring. Whenever I’m landing effective blows, I can tell that I am hurting my opponent.”

“At my level, every guy is a top contender. I have to train harder and improve my defense. I’ve been working on that.

“If you see my last three or four fights, you will see that I have been dominating in the first couple of rounds and then I run out of gas, I have been working on my stamina so that won’t happen on March 26.

“I have seen Diaz’s fights. We’ve sparred a couple of times. He’s got speed. He’s got a hunger. It’s his HBO debut, so he’s definitely motivated, but so am I. It’s going to be a great fight.

“I want to be champion of the word. I know he wants it too. On Saturday, we will know who wants it more. We both want to win and we are both training for a win. A fight between power and speed is a great match-up. Not to mention he’s Mexican and I’m Puerto Rican. You can expect a great fight and it’s not one you want to miss.”

Immediately following the telecast, HBO will present the debut of the half-hour special “Legacy on the Line: From Bradley to Pacquiao,” previewing the April 9 pay-per-view event.