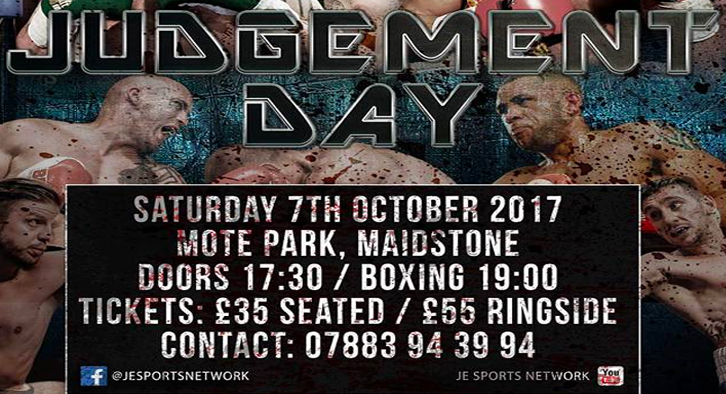 JE Promotions are all set to serve up a stellar show on October 7 in Maidstone with Judgement Day.

It’s the fifth event that promoter Joe Elfidh has staged at the Mote Park venue and the eight-fight card is set to be the biggest one yet.

Southpaw Shane steps up to eight-rounds against “Poochi”, who comes into the fight confidently off the back of a points win over unbeaten prospect Carwyn Herbert.

Dave Jones (8-0) steps up to fight Dorian Darch (12-5) as he begins his hunt for a shot at the Southern Area heavyweight title.

Welshman Darch has beaten a Midlands and Southern Area champion in his career, as well as sharing the ring with Hughie Fury and Anthony Joshua in back-to-back fights.

He will provide the 35-year-old from Queenborough with a stern test and, should he get through it, a shot at the Southern Area or an eliminator will likely arise next.

English super-bantamweight champion Josh Kennedy (9-0) fights in his home county for the first time in his three-year career.

The 26-year-old from Folkestone won titles in his previous two contests – the Southern Area featherweight strap with a third-round stoppage over Jamie Speight last December and a points win last March over stablemate Michael Ramabeletsa to claim the vacant English Championship.

The Ashford-born “Handsome” will be excited at the prospect of reaching double figures in his first Kent contest against an opponent yet to be announced.

Middleton’s Sharp, 25, will be looking for a good performance against the “Go-Getter” as he plans to defend his title in his next fight against former English champion Matthew Ryan on November 4.

The 33-year-old from Chatham is on the hunt for the English title, due to be contested between Mick Hall and Elliot Matthews next, and taking his win tally to double figures will further bolster his chances for the shot.

Former Team GB boxer Luke Gibb (2-0) is stepping up to six-rounds in just his third pro bout against Fonz Alexander (5-63).

Following a stellar amateur career with over 80 fights for Nemesis ABC in Erith, a Silver medal at the Four Nations, and dozens of appearances for England, “Gibbo” is replicating his success in the paid code.

The 28-year-old is going to be fast-tracked by manager Joe Elfidh and trainer Ray Askew from the Invicta Gym in Sheerness.

Also in action on the night is two-time Southern Area challenger, Martin Hillman (9-4), 26 from Sidcup, looking to get back to winning ways in his 14th pro contest.