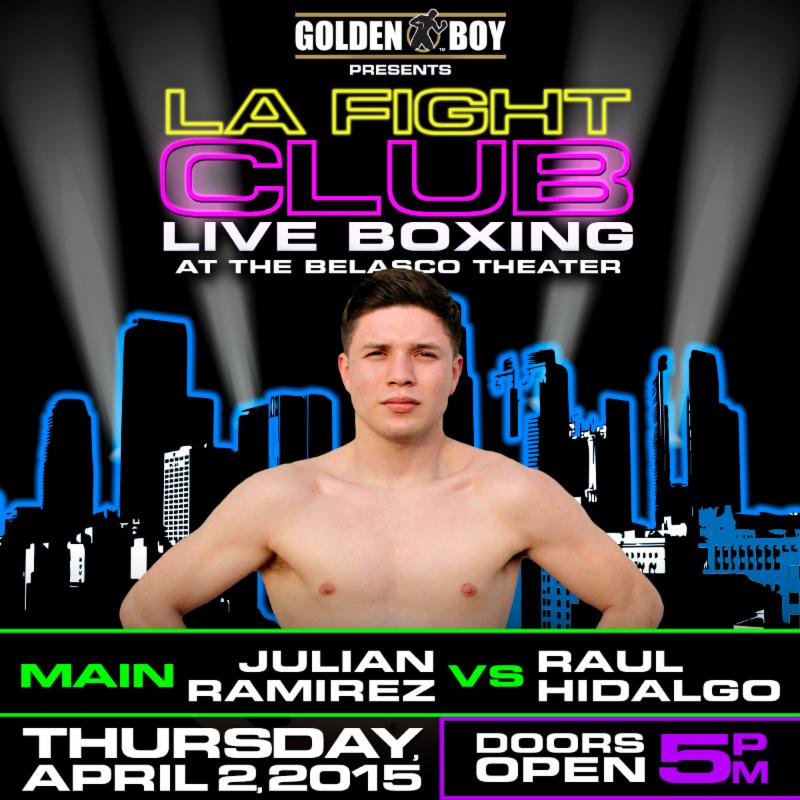 ” LA Fight Club was developed as the platform for up-and-coming fighters on the West Coast to display their talents, and Julian Ramirez is exactly the kind of exciting prospect that fans will see month in and month out at The Belasco Theater,” said Golden Boy Promotions Founder and President Oscar De La Hoya.

“I am excited to be part of the new Los Angeles series  LA Fight Club and to headline the April 2 event,” said Julian Ramirez. “I promise all the LA fans that they are going to have an exciting night. I want to put on a great show for my fans. I’ll be more than ready to give them an exciting fight.”

In the co-main event, Glendora, California’s Joet Gonzalez (8-0, 3 KOs), who recently signed with Golden Boy Promotions, will be featured in a six-round featherweight bout. Opening up the telecast, two-time Brazilian Olympic team member Everton Lopes (1-0) will make his second professional appearance after his unanimous decision win over Evan Woolsey on Feb. 27. Plus, Melsik Baghdasaryan will make his professional debut in a four-round welterweight non-televised bout. All will face opponents yet to be announced.

The undefeated East Los Angeles native, Julian “El Camarón” Ramirez, has boxing in his blood. His late uncle was the former WBA and WBC Super Featherweight World Champion Genaro “El Chicanito” Hernandez. Ramirez has been on the fast track since turning professional in 2012. A dynamic fighter who has the skills to succeed, Ramirez is coming off of a fourth win of 2014 when he faced Pedro Melo. Ramirez is looking to keep his undefeated status when he faces Hidalgo at The Belasco Theater.

A seasoned fighter, Raul “Bule” Hidalgo of Casas Grandes, Chihuahua, Mexico began his career as a professional boxer in 2010. Since then the fighter has consistently fought in both Mexico and the U.S. 2014 was a busy year for Hidalgo as he took on 6 fights all with some of the top prospects in the sport including, Jose Lopez, Gonzalo Garcia, Joseph Diaz Jr. He is coming off of a third round knockout victory over Jorge Luis Babuca on December. Hidalgo is looking to continue his winning streak when he faces Ramirez on April 2.

Rising featherweight prospect Joet Gonzalez of Glendora, California has been steadily climbing the professional ranks since his debut in 2012. Most recently, Gonzalez faced Jaime Gutierrez and David Clark quickly defeating both fighters via technical knockout before the fourth round. On April 2, Gonzalez will look to add another win to his resume.

A two-time Olympian for his home country of Brazil, Everton Lopes won 240 bouts as an amateur, earning gold at the 2013 Pan American Games as well. On Feb. 27, the talented 26-year-old southpaw made his professional debut in a super lightweight bout against Evan Woolsey winning by unanimous decision.