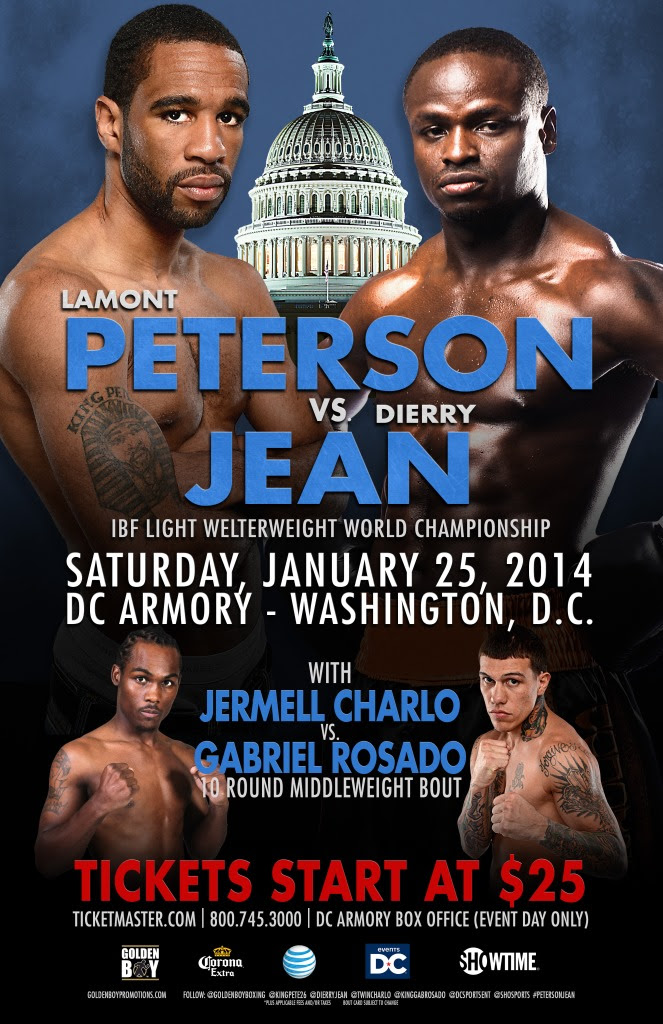 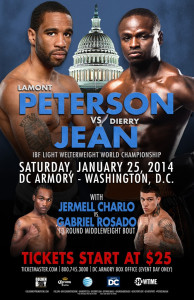 “This is the perfect way for me to kick off 2014, with a great fight against a tough opponent in my hometown,” said Peterson. “Fights like these bring out the best in me and I’m going to give my fans a performance to remember on Jan. 25.”

“I’ve waited for a big fight like this against a top-level opponent and now I’ve got it,” said Charlo. “Rosado is a rugged, tough fighter and with a win over him, I’ll be making a statement to the boxing world that I’m ready for even bigger and better things.”

“I wanted another world title shot after my fight with Peter Quillin, but with that rematch not happening right now, I want to stay busy and keep sharp until my time comes,” said Rosado. “Charlo’s got talent, but he’s not ready to face someone with as much experience as I have. I am ready to go after my recent fight with Quillin.”

“2013 was a great year for boxing on SHOWTIME, and this doubleheader shows that we’re ready to deliver even more exciting fights in 2014,” said Richard Schaefer, CEO of Golden Boy Promotions. “Lamont Peterson is a fan favorite in Washington, D.C., and I give him credit for risking his belt against a tough, unbeaten fighter in Dierry Jean. As for the co-main event, Gabriel Rosado always comes to fight and he’s going to put Jermell Charlo to the test on Jan. 25.”

“Coming off a record-breaking 2013, we are taking significant momentum into the new year,” said Stephen Espinoza, Executive Vice President and General Manager, SHOWTIME Sports. “Boxing’s passionate fan base has called for the world’s top fighters to take on the biggest challenges. Lamont Peterson returns to the ring and immediately takes a difficult main event match up against a hungry power puncher in Dierry Jean. And Jermell Charlo is a rising star taking a sizable step up against the battle-tested Gabriel Rosado. January 25 will be a night you don’t want to miss.”

IBF Junior Welterweight World Champion Lamont “Havoc” Peterson (31-2-1, 16 KO’s) will begin 2014 determined to defeat Dierry Jean and then continue on to battle his peers at the top of the 140-pound weight class. With his two most recent victories coming over Amir Khan and Kendall Holt, the 29-year-old has proven that he is one of the elite in the sport today, and in his first fight since a May 2013 loss to Lucas Matthysse, Peterson is hungry for a return to the win column and respectability.

A native of Haiti who moved with his family to Montreal, Quebec, Canada as a child, Dierry Jean (25-0, 17 KO’s) has proudly represented his adopted home country, winning a national amateur championship before turning pro in 2006. Since then, his professional record has been perfect, and after winning the NABF title in 2012 with a win over Lanardo Tyner in May 2013, Jean defeated Cleotis Pendarvis in the IBF title eliminator to become Peterson’s mandatory challenger.

At just 23-years old, former amateur star Jermell “Iron Man” Charlo (22-0, 11 KO’s) has made plenty of waves in the junior middleweight division over the last few years, dazzling with his mix of speed and power as he mowed down opponent after opponent. In 2013, he triumphed three times, defeating Harry Joe Yorgey (KO 8), Demetrius Hopkins (W 12), and Jose Angel Rodriguez (TKO 10).

A Philadelphia fighter in the truest sense, “King” Gabriel Rosado (21-7, 13 KO’s) is always willing to dig deep and battle it out in the trenches in search of victory. A veteran of nearly eight years in the pro game, the 27-year-old Rosado impressed with his gutsy efforts in recent middleweight title fights against Gennady Golovkin and Peter Quillin. On Jan. 25, he returns to 154 pounds, eager to prove that he’s worthy of another world title opportunity.

Peterson vs. Jean, a 12-round fight for Peterson’s IBF Junior Welterweight World Championship, will take place Saturday, Jan. 25, 2014 at the DC Armory in Washington, D.C. The event is promoted by Golden Boy Promotions and supported by Golden Boy Promotions’ sponsors Corona and AT&T. The live SHOWTIME telecast begins at 9:00 p.m. ET/PT (delayed on the West Coast) and will be available in Spanish via secondary audio programming (SAP). In the co-featured bout, Jermell Charlo defends his USBA Junior Middleweight Championship in a 12-round fight against Gabriel Rosado. Preliminary bouts will air on SHOWTIME EXTREME® at 7:00 p.m. ET/PT (delayed on the West Coast).