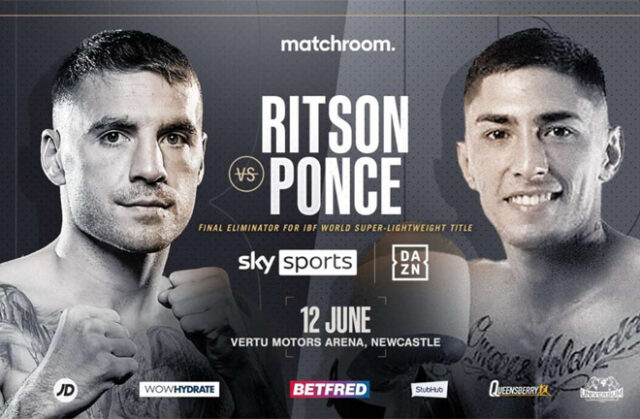 Ritson takes on dangerous Argentine, Jeremias Nicolas Ponce, in a final eliminator for the IBF Super Lightweight title in what will be the final Matchroom offering on Sky Sports before production moves to DAZN next month.

Ritson (21-1, KO12) has been patchy at ten stone since a whirlwind period of success at Lightweight, and will need to improve sharply if he has designs on a meeting with recently crowned undisputed world champion, Josh Taylor.

‘The Sandman’ cut a quick swathe through domestic level at Lightweight, winning a Lonsdale Belt outright in under six months, making his three defences in a combined less than four rounds, but then stepped up unsuccessfully to European title level in October 2018.

That night, Ritson started a massive favourite against Francesco Patera, but the Geordie was constantly hurt, especially to the body, in a torrid twelve rounds, eventually losing his vacant title tilt via split decision.

That loss forced a move up in weight, and, after two low key wins, he then defeated Robbie Davies Jr in an absorbing October 2019 points win to climb the world rankings.

Lewis’ last contest came a year later, and he seemed fortunate to take a split decision win against the veteran, Miguel Vazquez, and the Mexican took advantage of a lacklustre Ritson showing, although the cards said otherwise.

Ponce (27-0, KO17) represents a final hurdle for Ritson in the quest for world honours, and the 24-year-old from Buenos Aires is a largely unknown quantity, and we have seen plenty of those cause upsets over the past year.

The South American has only travelled outside of his native Argentina on a couple of occasions, the last saw him win the vacant IBO title in September 2019, travelling to Germany to take a majority decision win against Rico Mueller.

Opting against defending the title, instead, returning to his homeland to win two fights in a month at the back end of 2020. His last outing came in December of that year, where he had to come off the deck in the third round against Jonathan Jose Eniz before taking a close points win.

Prediction: Ritson will need to show marked improvement here to the Vazquez fight, as he struggled to get motivated, possibly due to a lack of a crowd that night.

He will have at least 1000 North East fans in attendance for this one, and he may likely have to overcome some tricky moments to score a points win over the rugged South American.

Thomas Patrick Ward (29-0-1, KO4) is rated number three currently with the WBO, and the man from County Durham returns from the first blot on his professional record when he takes on Mexico’s Edy Valencia Mercado (17-5-6, KO5) over ten rounds at Super Bantamweight.

Ward had all sorts of trouble in his last fight against Thomas Essomba, and, after suffering a nasty cut to his eye in round seven, Ward was removed from battle by the ringside doctor, and the contest was scored a draw after eight completed rounds.

Returning here against Mercado, who has only once previously fought outside of Mexico.

‘Dinamita’ drew three of his first four fights, and has a chequered record. He picked up the Mexican Featherweight title last time out, taking a split decision against the 16-0 Jose Ramon Olmeda.

Ward should have enough here though to take a clear win on the scorecards.

Another local favourite is Joe Laws (9-1, KO5), and ‘The Benwell Bomber’ will look to get back to winning ways against Nestor Maradiaga (9-10-2, KO5).

Laws was spectacularly knocked out in three rounds by Rylan Charlton in his last fight in October 2020, and the Welterweight will be keen to atone for that loss here.

Maradiaga went the distance with European Super Lightweight champion, Sandor Martin in December 2020, and is coming off a win, but Laws can take this one on points.

Ellie Scotney (2-0, KO0) continues her education, and the Catford-based Super Bantamweight should be able to deal with Vanesa Caballero (4-9-3, KO0) simply enough, likely needing the scorecards to defeat the Spaniard.

Tyne & Wear Welterweight, April Hunter (3-0, KO0) aims to make it four from four, and she should also be able to take a clear points win against the experienced Hungarian, Klaudia Vigh (3-27-1, KO2).

Highly decorated amateur, Cyrus Pattinson, makes his professional debut, and he should be able to halt Bulgaria’s Yoncho Markov (4-2, KO2) inside the scheduled six round distance at Super Welterweight.

Solomon Dacres (1-0, KO0) can score his first inside schedule win when the Midlands based Heavyweight meets Spain’s Alvaro Terrero (5-11-2, KO3).