We didn’t see this one coming but Teofimo Lopez Jr. annihilated IBF lightweight world titleholder Richard Commey on the card’s co-featured bout at Madison Square Garden that was expected to be very competitive.

The Brooklyn native overwhelmed the usually sturdy Ghanaian with a left hook in the second round that wobbled him and then then floored him seconds later with a right to the chin. Commey got up but his legs were practically gone and this allowed Lopez to land several unanswered right-left combinations. 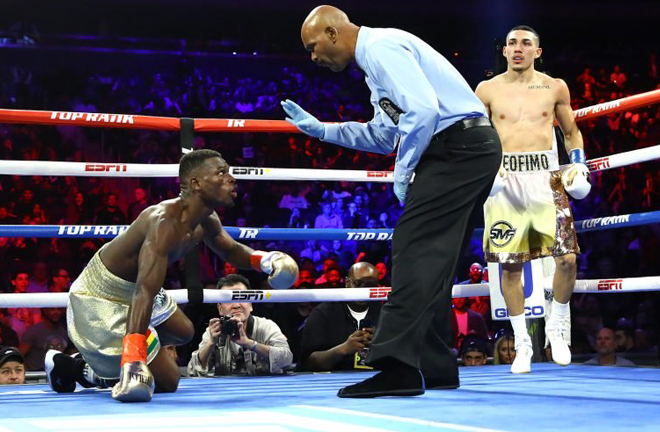 At this point, Commey was practically pinned against the ropes and unable to properly defend himself as Lopez blasted away until referee David Fields stepped in to wave the action off at 1:13.

Again, this was quite surprising given Commey’s pedigree and the fact he had previously pushed former world titlist Robert Easter Jr. to the limit in two highly competitive decision losses.

This was certainly a redemption fight after many believed Lopez was exposed in an IBF title elimination fight against Masayoshi Nakatani in July.

Lopez is expected to fight unified lightweight champion Vasiliy Lomachenko (14-1, 10 KOs) next, who was seated ringside to scout his future opponent. Lomachenko has collected all of the other belts except for the IBF strap now held by Lopez so their potential meeting will decided the undisputed number one at 135 pounds.

Lopez was understandably ecstatic after the biggest win of his promising career.

“You all know who I want to fight next—2020 is going to be a big year. “The Takeover has arrived, and you haven’t seen anything yet,” Lopez said.

Featherweight Michael Conlan trounced Vladimir Nikitin in a long-awaited rematch of their highly controversial 2016 Olympic quarter-final meeting that saw the Belfast man on the wrong side of a bad decision.

Conlan righted that wrong Saturday night winning comfortably by scores of 100-90, 99-91 and 98-92 to exact revenge upon his amateur nemesis.

Conlan (13-0, 7 KOs) played to his strengths by mostly outboxing Nikitin (3-1, 0 KOs) from the outside with the jab, with an occasional mixture of shots to the body and did not let his opponent bully his way on the inside. 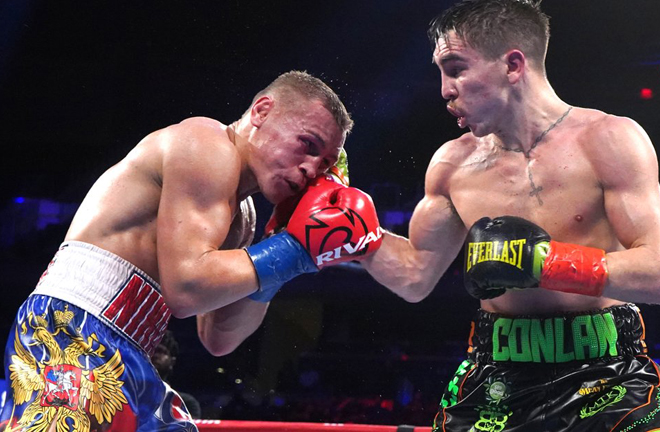 The Russian pressured Conlan throughout the fight but was ineffective with most of his punches. Nkitin’s punches were too wide although he did land some good overhand rights, including one in the fifth that got Conlan’s attention.

Conlan was warned for a low blow in the eighth round followed by warnings to both fighters for fouling. The pro-Conlan crowd cheered their man on after a pair of right hands found their mark.

A triumphant Conlan raised his hands in victory late in the 10th round, knowing this time that he had done enough to win with the judges.

“I needed to right this wrong,” Conlan said. “Full credit to Nikitin, who fought his heart out. There’s no bad blood. There never was. Now we can put this chapter of my career behind me.”

What do you do after 1⃣4⃣ weeks of training and 1⃣0⃣ rounds of boxing? Eat pizza! 🍕