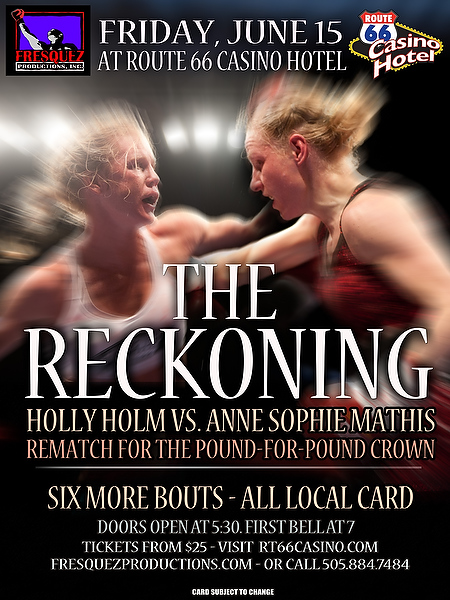 Holm has lost only twice in nearly eight years, including her shocking seventh-round loss by knockout to Mathis, which snapped Holly’s 24-fight unbeaten streak. Their much-anticipated 10-round rematch is set for June 15 at the same site as their Dec. 2 fight, headlining the Fresquez Productions presented “The Reckoning” at the Route 66 Casino Hotel in Albuquerque, New Mexico. 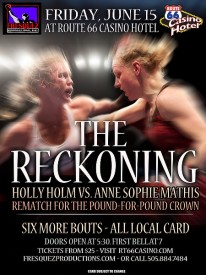 “I think this fight will be harder and I feel that I need to knockout her out again to win,” Mathis said from her training camp in France. “I don’t think she will come out looking to be confrontational. I’m certain there is an advantage for me having knocked her out, especially knowing that I’m fighting the same opponent in the same place. Physically and mentally, I’ll be 100-percent in this fight.

“I haven’t changed anything since our first fight. I’ve continued working to improve my technique and mental approach. I study my opponent so I am as prepared as possible. I don’t disrespect anybody but trust in myself and my work.”

In addition to defeating Holm, Mathis has beaten other world champions such as Myriam Lamare (twice), Jane Couch, Duda Yankovich, Ana Pascal and Nathalie Toro. Anne Sophie is on a 25-fight win streak, dating back to 1995 when she lost her second pro fight.

“For me it’s impossible to change your boxing style in a few months,” seven-time and reigning IBA/WBA World Champion Mathis noted. “She will return to her natural sources. I’ve studied most of her fights and know much more about her than she knows about me to win again. I’m not going to say much more other than I will be stronger than I was for our first fight. I am very strong. I expect her to fight defensively, trying to touch me and then escape to avoid confrontation.

“No matter the results of this fight, I hope to face (Celia) Breakhus at the end of the year, or I’ll probably start thinking about retirement. I’m very satisfied with the American media but, on the other hand, disappointed that the French media has no interest in women’s boxing.”