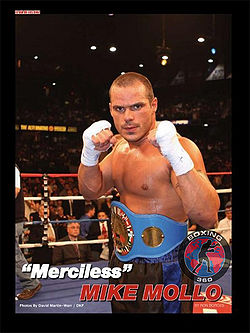 Heavyweight contender, Mike Mollo (20-3-1, 12 KOs), returns to the ring on May 18 against Franklin “Yah Yah” Lawrence (17-2-2, 12 KOs) in a 10-round bout for the vacant NABA title.  The fight takes place at the Dover Downs Hotel & Casino inside the Rollins Center in Dover, Delaware on their “Friday Night Fight” series. 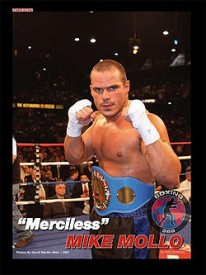 Promoted by Boxing360, Mollo has been in the ring with some of boxing’s top heavyweights, including Jameel McCline, Andrew Golota and Kevin McBride.   Looking to get back into title contention, Mollo is determined to show the boxing community and those in attendance that he’s serious about his boxing career.

“Although I’ve been out of the ring since August of 2010, I feel confident in my ability to make some serious noise in the heavyweight division,” Mollo said. “I’ve been training hard in the gym and my timing is right on point in my last few sparring sessions.   Ring rust will not be a factor when I step in the ring.  Lawrence is a big puncher and I know he’s coming to fight.  One thing is for sure, I’m coming to fight as well, and the fans are going to witness a great night of boxing.”

Said Boxing360 promoter Mario Yagobi, “Mollo is in great shape right now which means trouble for Lawrence.  I’ve seen the positive progress with his mental approach to the game and his trainer, Pete Brodsky, says he’s looking fantastic in sparring.  With the right training regimen, Mollo is one of the best heavyweights in boxing.  I’m excited to see what he will bring to the ring on May 18 because he’s a has a crowd pleasing style.”