MTK’s first UK offering of 2020 came from the famous Ulster Hall in Belfast.

It proved to be the last chapter of former IBF Bantamweight champion, Lee Haskins’ career at the head of the bill, as injuries over a long period of time in the ring caught up with the Bristolian, as he was stopped in five rounds by the younger and fresher David Oliver Joyce.

Haskins entered the ring wearing a knee support, and this would play a big part later on. The former World Champion started well enough in the first couple of sessions, catching the Irishman with hard shots early on, but once Joyce found his range from the third round onwards, not allowing Haskins to settle and applying steady pressure.

Halfway through the fifth, Haskins missed with a wild left hook from his usual award stance and his leg seemed to give way. He fell to the canvas and referee Howard Foster counted a knockdown. Lee struggled to then put any weight on his injured knee, and, after being driven back to the ropes under heavy fire, the fight was stopped.

Haskins immediately announced his retirement lost fight and bows out with 36 wins from his 41 paid contests.

Fantastic sportsmanship from these two warriors. 🥊

Sean McComb stepped up in class and rose to the occasion, as he forced Mauro Maximiliano Godoy to retire at the end of six rounds.

McComb dominated the action throughout, landing big shots in what was an impressive and controlled performance. Godoy complained of a broken jaw and promptly withdrew from battle.

McComb declared post fight of his intention to move down in weight to Lightweight, and he will be a dangerous addition to a stacked domestic division.

Gary Cully connected with a monster left hook in the first round of his Irish Lightweight title clash with Joe Fitzpatrick, which dropped the local lad hard, and he never fully recovered.

Fitzpatrick beat the count, but another big left on the resumption left him in big trouble, and the referee duly stepped in. 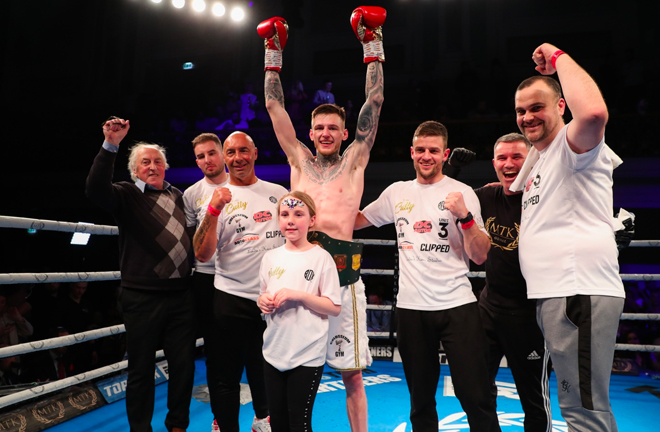 Crocker hurt his opponent several times during the contest, and was close to stopping Thain late on in the final round, but he remained disciplined in a mature display.