It was both a frantic and controversial night at the York Hall in Bethnal Green as the identities of the finalists in both the Super-Lightweight and Featherweight editions of the MTK Golden Contract tournament were confirmed.

The controversy came in the ten stone event, where the punter’s dream final was realised. Tyrone McKenna somehow advanced from the semi finals, and retained his WBC International belt with a unanimous points win over a rightly furious Mohamed Mimoune.

The Frenchman had every right to feel aggrieved as he boxed seamlessly on the front foot for the majority of the contest, and looked like he was racking up the points in an impressive display.

It was absorbing action, as both men went for their shots with Mimoune landing the more hurtful hooks. Mimoune bloodied the Irishman’s nose in the seventh, and soaked up considerable punishment in the eighth before rallying in round nine to the delight of the sold out crowd.

The final round saw more toe to toe action, and the enthralling encounter went to the cards.

With observers at ringside and the crowd expecting Mimoune’s hand to be raised, it was McKenna that got the nod by scores of 97-93 and 96-94 twice, Mimoune was understandably raging as the result was called, and remained in the ring for sometime afterwards. 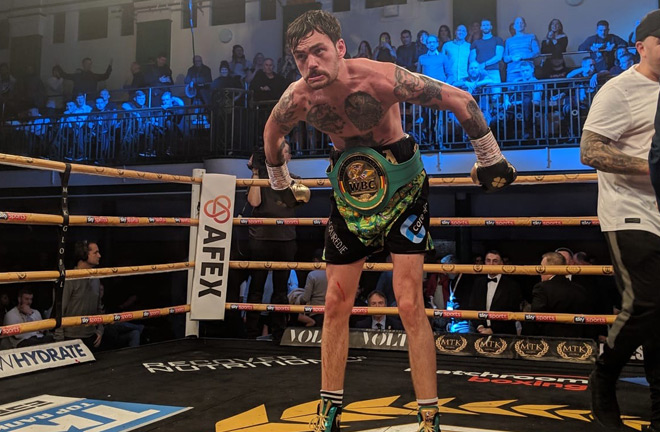 McKenna will of course meet Ohara Davies in the final, and “Two Tanks” was involved in no such controversy in his sixth session stoppage of Jeff Ofori.

Davies did however damage his right hand during the contest. Ofori did start brightly, especially on the counter, but Davies found his range in the third, scoring a knockdown right on the bell.

Ofori seemed to tire early, but did have success in the fifth, and at the start of the sixth as he seemed to rock Davies. The Hackney man regained control though, and a series of unanswered big right hands forced the referee’s intervention.

The Featherweight final will be an intriguing prospect, as Ryan Walsh and James “Jazza” Dickens came through their final four tests.

Cromer based, Walsh made the first breakthrough in the sixth, flooring McCullagh with a heavy hook that he did well to get up from.

McCullagh was dropped again in the eighth as Walsh continued to dominate proceedings in the second half of the bout, and as the fight went to the cards, the result was a formality. Scores of 97-91 twice and 96-92 sealed Walsh’s place in the showpiece final. 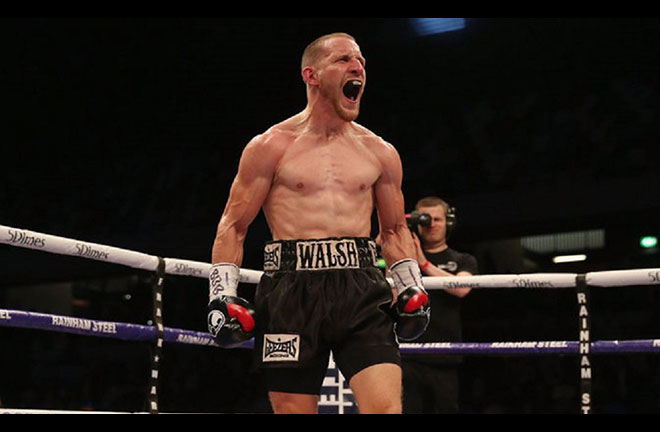 “Jazza” Dickens got the better of Nottingham’s Leigh Wood to pick up the WBO European belt and book his final ticket.

It was a bruising encounter, and quite possibly the fight of the night as the two exchanged vicious shots almost throughout.

Wood was on the floor in the opener, but the referee ruled a slip, but Dickens got the better of the opening exchanges. It took until the middle rounds for Wood to truly get going, and the fifth and sixth saw him gain a foothold, although a crunching Dickens body shot in round six did hurt Wood.

“Leighthal” seemed to tire in the seventh, before roaring back in round eight, wobbling Dickens, drawing blood and then switching his attack to the body. Dickens regained control and had Wood in big trouble in the ninth, catching his man with a huge left and a hard follow up attack.

With it all on the line in the final round, both men traded leather in a bid to secure the win, and the crowd were on their feet as the fight went to the judges.

One judge scored a 95-95 draw, but was overruled by his two colleagues, who tallied 96-94 and 95-94 for Dickens who took a majority decision win.