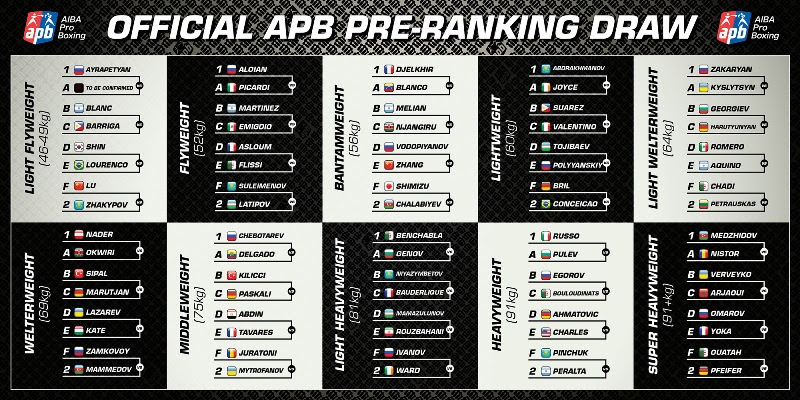 The Official AIBA Pro Boxing (APB) Draw took place today at the AIBA Boxing Academy in the Talgar region near Almaty in Kazakhstan.

This ceremony was attended by the AIBA President Dr Ching-Kuo Wu, the President of the Kazakhstan Boxing Federation Mr Timur Kulibaev, the Minister of Culture and Sports of the Republic of Kazakhstan Mr Aristanbek Mukhamediuly, the Vice-President of the Kazakhstan Boxing Federation and the AIBA Executive Committee Mr Serik Konakbaev, and other important guests including the APB Boxers who are currently attending the APB Workshop.

“The APB Official Draw was a very impressive and emotional ceremony. Finally I have met all of these incredible boxers. Even if I have the strongest opponent in the group for my first fight, I am still confident that I can win, and this is my objective for now,” said Delgado.

APB’s Pre Ranking phase will be launched on October 24th, and the first inaugural matches will take place in Bulgaria, Italy, Azerbaijan and Kazakhstan.

The Grand Opening of the AIBA Boxing Academy coincided with the AIBA Pro Boxers Workshop, taking place for nearly 80 of the best boxers in the world who will all be competing in the upcoming revolutionary Pro Tournament.

“Since I became the President of AIBA in 2006 it has always been my dream to build the AIBA Boxing Academy. Today this dream came true due to hard work of AIBA and the Kazakhstan Boxing Federation. This Academy is the unique sports complex in the world and I am proud that this place will become a home for all members of AIBA Family,” said AIBA President Dr Ching-Kuo Wu.

The Academy represents a unique educational-training complex, which will become the centre for development of boxing.

Altogether, it is an integrated training institute which embraces all aspects of the development of the sport of boxing, and one which will set global standards for boxing education, development and performance.

The academy is an integrated training institute which embraces all aspects of the development of the sport of boxing and which will set global standards for boxing education, development and performance.