“What motivates me is the ability to motivate others and inspire others and be an example to people who don’t have that edge and don’t know if they really want to be themselves or not.” Austin Williams (4-0, 3 KOs) is a wise head on old shoulders, with a path clearly mapped out to achieve his goals, whilst being a role model to others not in his position.

In his first four professional fights, the Middleweight prospect is living up to the nickname ‘Ammo’ given to him by his friend, Ralph.

The 23-year-old has amassed four consecutive victories, with his first three each coming inside the first round.

Williams who was born in Milwaukee, Wisconsin moved to Houston, Texas at the age of ten where he still resides and trains.

Despite it being relatively short, Williams picked up a host of accolades, becoming a two-time USA Boxing Western Regional Champion and claiming the Houston Golden Gloves twice and he credits this with securing himself a deal with Eddie Hearn’s Matchroom Boxing. 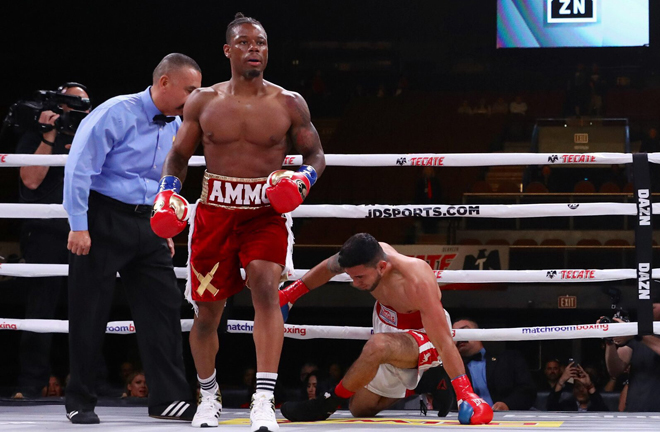 “I only started boxing at the age of nineteen. I only had two novice fights. I went open after the second. I had forty-six open elite fights.

“I got a lot of knockouts, stoppages and KOs and Matchroom took to that, they loved that.

“They loved my demeanour and the way I presented myself as well and they presented me with a great contract and a great deal.

“I said I was going to capitalise on what I’ve build in this short amount of time and not have a lot of miles on me, I’m fresh.

“You see a lot of guys going through the amateurs for too long and they’re damaged goods.”

He is part of a new crop of American talent, all part of what promoter Eddie Hearn will hope and believe is a successful future, under the Matchroom Boxing USA banner and DAZN. Fellow American Middleweight prospect Nikita Ababiy, who ‘Ammo’ fought in the amateurs and unbeaten Lightweight Otha Jones III are very much prominent to this new phase of boxing.

Jones III, a standout amateur competes on the same bill as Williams on Thursday night in Meridian at Island Gardens, Miami as Hearn carefully builds their profiles in such an early stage of their professional journeys on the undercard of Demetrius Andrade’s world middleweight title defence, a bill which also features internet sensations, Jake Paul and AnEsonGib.

Both the Ohio youngster and his compatriot are familiar to UK audiences, with Jones III making his York Hall debut last June with a first round stoppage, whilst his Ammo’s last bout was on the undercard of his good friend Regis Prograis’ mesmerising battle with Josh Taylor at the O2 arena last October.

Amazing media workout for all of my U.K supporters today! The love out here is unreal, ready to put on a unforgettable show this Saturday!! #AMMOINTERNATIONAL #london #boxing

Whilst, the bout itself was a display of technical skill, ferocious speed and power it was what preceded this that will be more long-lasting.

Williams, who only signed with Matchroom last February, begun to announce himself with a lavish trip to Newcastle in a private jet to watch Lewis Ritson’s victory over Robbie Davies Jr, whilst at the media workout the American donned an Arsenal jersey, which he admits was a marketing tool, but nonetheless it has only helped his stock in a sport reliant on immaculate promoting a PR efforts.

Ammo also managed to fit in some invaluable sparring the WBA (Super) Super Middleweight champion Callum Smith whilst over in the UK, prior to the Liverpudlian’s victory over John Ryder, an experience which will stand him in good stead as he continues his progression.

The origin of ‘AMMO’ 🔥 pic.twitter.com/sJio5Cst2A

The victory at the O2 was another huge card for ‘Ammo’, following his appearance on the undercard of Anthony Joshua’s shock defeat to Andy Ruiz Jr at Madison Square Garden and on Thursday he returns against Albuquerque veteran Donald Sanchez, (5-2, 3 KOs) a fight on paper which seems relatively straightforward, but could well be a banana skin with the 35-year-old seemingly holding the punching power to ask questions.

It remains abundantly clear that his passion for the sport is rooted in his desire to influence those struggling with their own demons, something which motivates him on a daily basis

“What motivates me is the ability to motivate others and inspire others and be an example to people who don’t have that edge and don’t know if they really want to be themselves or not,” Williams continued.

“I get messages everyday saying ‘I wasn’t going to do X, Y, Z but I saw you and I’m doing it, that’s so fulfilling for me.

“Thats what I’m here to do, I’m supposed to inspire people.

“Everyone can connect to a fight, a battle in some way shape or form. No matter what you do. You can be a pianist having a battle going to do a recital in front of people.

“Thats what makes me hungry to get up when I don’t feel like doing it, because it’s for more than just myself.”