Nothing quite sums up Frank Warren’s vision than his two upcoming shows. Saturday’s show at the Birmingham Arena and ‘The Fight Before Christmas’ bill housed at the Copper Box arena on December 21st, spearheaded by the frighteningly powerful star of tomorrow, Daniel Dubois as well as the attraction of Love Island runner up and 2-0 Light heavyweight Tommy Fury.

The veteran hall of fame promoter, Warren has invested his stake in promising young talent, who he anticipates will improve dramatically in the years to come and ideally be moulded into the next pay-per-view stars.

Whilst Eddie Hearn’s Matchroom Boxing stable boast a strong current crop as well as the best of the young American talent, his bitter rival appears to have claimed the standout British prospects, whilst remaining highly competitive with the more experienced likes of Tyson Fury, Anthony Yarde and current featherweight world champion Josh Warrington, all firmly apart of the Queensbury Promotions roster.

But what is perhaps most intriguing about this bill, is the futures which behold certainly some of the fighters vying for wins on the undercard.

Hamzah Sheeraz is one of the brightest young talents, possibly that Warren holds and at just 20-years-old his career has only just really begun.

Sheeraz amassed over 100 amateur bouts before turning over in September 2017 and you could say it was in fact fate that has led the Super Welterweight to the position he is now, racing to nine straight wins and five knockouts. 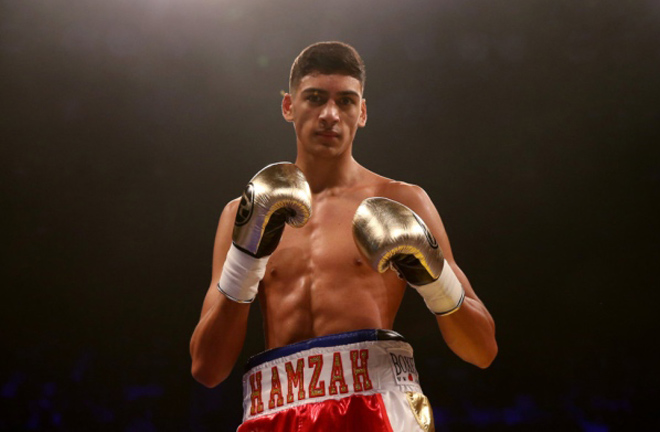 The man from Slough, who first put on the gloves at the age of eight was surrounded by boxing from a young age. His grandfather and uncle started the trend as fighters with the latter developing into a successful amateur picking up several national titles.

However, Sheeraz has taken on the reigns superbly in the paid ranks and can make family history on Saturday night if he can secure his first professional title, with the vacant WBO European belt on the line against Ryan Kelly (14-2).

The highly-touted youngster has not as of yet had to endure a major test but he faces a game opponent in Kelly, who is certainly coming to put a spanner in the works and push the favourite into deep waters.

Whilst, Hearn seems to hold a monopoly on the domestic light middleweight scene, promoting the likes of British champion Scott Fitzgerald, Anthony Fowler and Ted Cheeseman, Sheeraz is seemingly not far off a shot at either one of those mentioned and with another win and belt on his record he becomes a far more dangerous yet perhaps a more attractive prospect.

A victory was also cement his place in the WBO rankings where the major tests lie. The monsters of the division like Jarred Hurd, Sergio Garcia, Liam Smith who must be fights Sheeraz yearns for in good time.

But before all of those names are even considered, Sheeraz must build his profile and Saturday night’s ‘Midlands Mayhem’ bill live on BT Sport will certainly pave the way for those massive nights and fights.

One To Watch; Bruno Tarimo, The Tanzanian Underdog

One To Watch; Bruno Tarimo, The Tanzanian Underdog