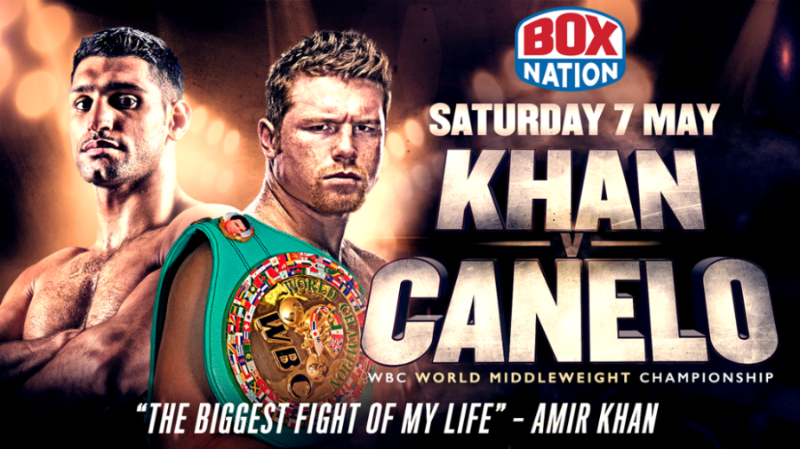 BoxNation have secured the exclusive UK live TV rights for the fight between Canelo Alvarez and Amir Khan on Saturday May 7th.

BoxNation, who in the first four months of this year will have shown five of the ten best pound-for-pound fighters in the world in Sergey Kovalev, Andre Ward, Terence Crawford and Gennady Golovkin exclusively live, delivers to its subscribers and British fight fans the mega-fight of the year.

Mexican great Canelo has captivated fans around the world with his all-action brand of fighting and desire to face the toughest challenges. With an outstanding record of 46 wins, 1 loss, 1 draw and 32 KO’s, his sole loss came against then pound-for-pound great Floyd Mayweather Jr. on points, but has since gone on to lay claim to be boxing’s biggest draw and one of the best and most recognized fighters in the sport.

Canelo makes the first defense of his crown that he won against Puerto Rican rival Miguel Cotto last November at the catchweight of 155lbs, but now must match his power and ferocious combination punching against Khan’s lightning fast and power-packed fists.

For British ace Khan, 31 wins, 3 losses and 19 KO’s, he faces the biggest challenge of his life when he steps up in weight to take on Canelo in a truly career defining fight. The Bolton fighter has faced insurmountable odds in the past when as a 17-year-old at the 2004 Athens Olympics he mesmerised the nation as he battled his way to a silver medal.

“I’m delighted and proud that the biggest fight of the year between Khan and Canelo will be broadcast exclusively live in the UK on BoxNation,” said Frank Warren, Chairman of BoxNation. “We’ve had a tremendous year so far with five out of the top ten world’s best fighters all showcasing their talents on the Channel Of Champions and now the fantastic addition of Canelo vs. Khan. The fight has caught the imagination of the public because Khan is taking a huge risk by moving up a couple of weight divisions to face one of the most fearsome fighters in the world in Canelo. It’s a fascinating clash that has got the public, trade and media all split. Can Amir overcome the odds and use his fast feet and hands to overcome the raw aggression and power of Canelo? UK fight fans will be able to find out only on BoxNation.”

“BoxNation is a great broadcast partner to carry the Canelo-Khan mega fight in the UK,” said Oscar De La Hoya, chairman and CEO of Golden Boy Promotions. “Canelo-Khan is an international fight, with Mexico’s biggest star fighter facing Britain’s biggest star fighter, so I am pleased British audiences will have the opportunity to catch the action on BoxNation.”

“Amir Khan and I are two warriors and I am very pleased that such an important network like BOX Nation will be broadcasting our fight in the UK,” said Canelo Alvarez. “This demonstrates the tremendous interest that exists in this mega-fight on May 7, and will remind everyone that the fans are the ones who will be victorious because we will deliver an exciting fight.”

“The fight against Canelo is the biggest challenge of my career and having the support of my fans back home, watching live on BoxNation, is going to help inspire me to victory,” said Amir Khan. “This fight is going to have it all – speed, power, skill – and I’m going to give everything to make sure that it’s my hand that is raised come the end of the night. It’s not going to be easy but I’m going to do British boxing proud.”

Premier Sports will air what is likely to be boxing superstar Manny Pacquiao’s final fight live and exclusive in the UK when he steps in against Timothy Bradley next Saturday night.

The pair clash for the third time on April 9th when they will look to settle an old score with both fighters sharing a win apiece from their previous meetings in 2012 and 2014.

Taking place at the MGM Grand in Las Vegas, Premier Sports will be the only the place for British fight fans to see the Filipino legend in action before he hangs up his gloves.

Premier Sports is available on a number of platforms including Sky, Virgin, TalkTalk and online for just £9.99 a month, with no-connection fee or minimum term.

The channel was launched in August 2010 and has screened a number of top sporting events from football, rugby league, motorsports, ice hockey, boxing and many others.

The live broadcast of Pacquiao’s megafight with American ace Bradley will see the eight-division world champion back in the ring for the first time since his blockbuster showdown with pound-for-pound king Floyd Mayweather last May.

Five-time world champion Bradley is coming off an impressive ninth-round stoppage over the tough and durable Brandon Rios, and will be looking to avenge his only defeat to date when he takes on Pacquiao.

Both men are in good spirits ahead of the bout and will be looking to make sure they put on a great show come fight night.

“I look forward to my battle with Timothy Bradley and giving boxing fans a fight they will always remember,” said Pacquiao. “This fight has a very special meaning to me and I will pour every ounce of my being — physically, emotionally and spiritually — into preparing for Bradley. “He has my full attention. I dedicate this fight to my fans and to my countrymen throughout the world who have kept me in their prayers. And as always, I fight to bring glory to the Philippines,” he said.

Richard Sweeney, General Manager of Premier Sports, added: “We are delighted to be showing Manny Pacquiao’s fight with Timothy Bradley live and exclusive in the UK. This is going to be a fantastic fight between two of boxing’s biggest and best names. Premier Sports offers great sporting content to our subscribers and at just £9.99 represents real value-for-money. This is one fight not to be missed.”