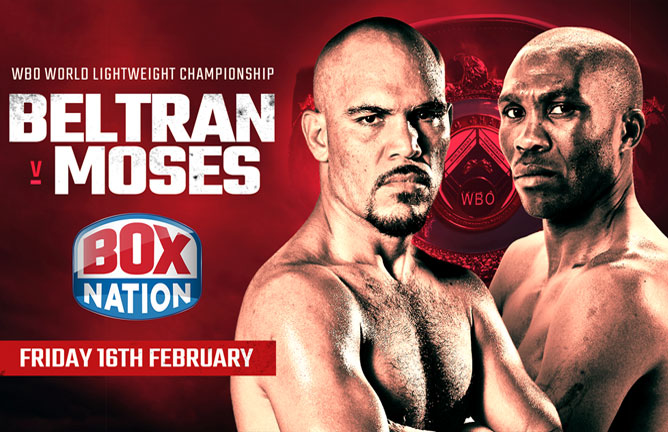 The vacant lightweight world title will be on the line with Ray Beltran vs Paulus Moses exclusively live on BoxNation on the 16th February 2018.

Mexican mauler Beltran will challenge for the world title for the third, and at 36, possibly final time of his career.

A long-time sparring partner of Filipino superstar Manny Pacquiao, Beltran’s first shot at a major title was a disputed draw against Scotland’s Ricky Burns in 2013, with his second seeing him outclassed a year later by pound-for-pound ace Terence Crawford.

Beltran, with a record of 34-7-1, 21 KOs, is fighting for more than just a world title as he looks to apply for permanent residence in the US with a victory proving a huge boost in his application attempts.

However, he is set to face a similarly experienced foe in Namibia’s Moses who will go into the ring with a record of 40-3, with 25 KOs.

‘The Hitman’, will be fighting on American soil for the first time and is on a good run of form after going unbeaten in nearly three years.

He is used to travelling having fought around the world in South Africa, Japan, Ukraine and even Scotland when he lost a unanimous points decision after challenging for Burns’ lightweight world title in 2012.

February 16th is all geared towards Beltran and he hopes to finally get a world title after a long road.

Jim McMunn, BoxNation Managing Director, said: “This is a great opportunity for Ray Beltran to finally become a world champion. He has been unlucky in the past but now he will get the chance to challenge for the belt. In boxing it is never easy, and Paulus Moses will have big dreams of his own. Both men know what is on the line and will produce a great fight for BoxNation subscribers.”