It was an understandably cagey opening from both due to the prize on offer, but Riakporhe looked good off the jab and landed a good right hand to the body.

Massey was jabbing well himself in the round, trying to back up his opponent and landing with a right hand. There was plenty of clinching in the third, but then Riakporhe exploded into life, landing a big right hand that wobbled his opponent, who did well to ride out the storm and see out the round.

‘One Smack’ responded by immediately going on the front foot in the fourth and a great body shot from the Derbyshire man seemed to momentarily hurt Riakporhe.

Referee Phil Edwards was forced to step in to hand out warnings in the fifth due to the constant holding, which in large parts was initiated by Riakporhe and the sixth and seventh saw more of the same, with the action sporadic. 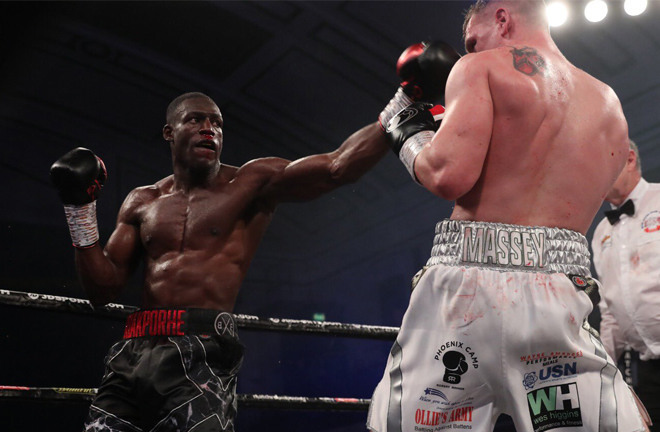 Massey was out hustling the Londoner at times, however another big right found the mark which shook Massey to his boots. Massey was now desperately trying to hold, but was unable to. Unfortunately for Riakporhe, he ran out of time to finish the job.

It would be the tenth round which would prove pivotal, as Riakporhe landed what looked like a forearm to the top of Massey’s head that forced the 26-year-old to dip his knee to the canvas, which the referee scored a knockdown.

Riakporhe was struggling though with the effects of a bloodied nose and Massey roared back to end the round well. Edwards was again involved in the eleventh, as he gave Riakporhe an overdue final warning for excessive holding, and the Dillian Whyte-managed charged was fortunate not to suffer any more points deductions during the contest.

Riakporhe went out for the final round intent on making a statement and an early assault forced Massey to hold, although he did land a big right of his own at the end of the session.

Richards held to draw against Sugden

Craig Richards got more than he bargained for in his Light Heavyweight eight rounder with Newark’s Chad Sugden, as he was forced to settle for a draw.

Richards (15-1-1) took this assignment as a warm up to his 2020 British title tilt against Shakan Pitters, but ended up becoming embroiled in a real test against the former Kickboxing world champion.

After a cagey opener, the second saw Sugden (11-1-1) boxing well, but he took a solid right from Richards which bloodied his nose.

The third saw Sugden land, what proved to be one of many right hands and he was certainly coming into the argument in rounds four and five too with his high work rate. 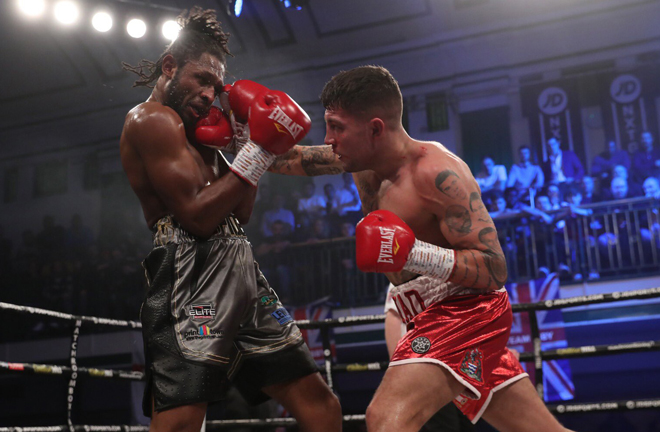 Richards was landing the meatier shots, but Sugden was the busier, with his right hands finding the mark. ‘Spider’ moved up the gears in the penultimate round, but was caught by another Sugden right. This time he responded with a uppercut as the two exchanged. The final round saw Sugden really take it to Richards as the bout went to the referee’s card.

Lee Cook saw the contest 76-76, which left Richards in disbelief, although he is still set to face Shakan Pitters for the British strap next year.

5️⃣-0️⃣@scourtenay’s second visit to York Hall ends in similar fashion to her first! 💥