It’s a cracking start to 2020 New Year this Sunday, as Joe Gallagher puts on his M22 Promotions hat alongside training Sam Hyde for his English title clash against Deion Jumah at the Woodhouse Park Lifestyle Centre in Wythenshawe, Manchester on a card entitled “Hollywood Storm.”

The main event comes at Cruiserweight with the champion, West Londoner Deion Jumah (12-0, KO7) taking on local lad Sam Hyde (15-1-1, KO8) in what also doubles up as a final eliminator for the British title, currently held by Richard Riakporhe.

The division is currently undergoing a boom domestically, with talent such as Laurence Okolie, Commonwealth champion, Chris Billam-Smith, Tommy McCarthy and Jack Massey to name a few, all involved in a competitive weight class.

Jumah, 30, turned professional in February 2012 under a wave of interest having been snapped up by the Sauerland’s under the tutelage of Adam Booth.

This followed a successful amateur stint in which he captured two ABA titles and boxed at international level, despite having only 24 unpaid bouts in total.

Il be defending the English title in a British title eliminator against Sam Hyde on the 19th January in Wythenshawe. Tickets and travel information to be released soon @boxingbos 👻 #AkiraAndPartners @idmobileuk @bxrlondon

After eight straight wins, predominantly in Germany and Denmark, a serious heart illness threatened to derail “The Ghost’s” career entirely.

He was forced to take over two years away from the sport before penning a deal with Steve Goodwin, returning in March 2018. Since then he has risen up the ranks, claiming the vacant Southern Area crown with a fifth round stoppage of Ossie Jervier, before doing the same in his last fight to Wadi Camacho in September 2019 to secure the vacant English strap.

Jumah certainly looks to be making up for lost time and will expect to continue his progress with a win over Hyde on away soil this weekend. 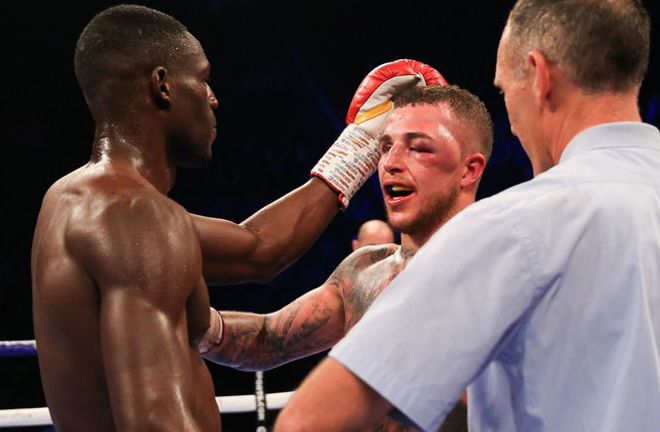 Hyde more than held his own and was ahead on all three cards before a grotesque injury to his left eye, resulting from an onslaught of right hands from Riakporhe forced his corner to throw in the towel.

The 26-year-old will be eager to show his foe that he can comfortably mix at that level again and fought twice in 2019, blasting out Jozef Jurko in a round in April and stopping Jiri Svacina in four in his last assignment in September.

Prediction: I really feel that Jumah is a special talent, and 2020 could well be the year where he breaks out and makes the boxing public take notice.

Hyde is a tough customer, but he may struggle with Jumah’s more polished skills. Hyde will be there until the end I feel, although mainly frustrated. The pick is a comfortable enough points win for the champion.

There is the anticipated debut of Osian Williams, with the Super Lightweight taking part in a four rounder. Local lad Connor Lynch (5-0, KO0) is also in action at Welterweight.