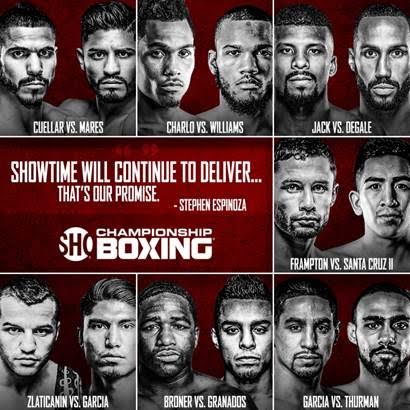 The schedule, which is the second robust boxing programming announcement from SHOWTIME in 2016, was announced today, and includes…

Seven of the 14 fighters are undefeated, while the champions and challengers in the six world title fights boast a combined 313 wins versus just six losses.

“This is a slate of high-level, evenly-matched, 50/50 fights – the best fighting the best – which has become the calling card of SHOWTIME CHAMPIONSHIP BOXING,” said Espinoza. “Every fight we are announcing today features a top 10-ranked champion taking on a top 10-ranked challenger; in many cases, it’s top-five vs. top-five.

“This is our second major boxing lineup announcement this year, further proof that no other network is delivering high-quality competitive fights – without relying on PPV – as consistently as SHOWTIME. No other network is as committed to driving the sport forward. SHOWTIME CHAMPIONSHIP BOXING is giving subscribers the best that boxing has to offer.”

In a highly anticipated featherweight blockbuster, hard-hitting Jesus Cuellar will make the second defense of his WBA 126-pound title against Abner Mares, a three-division champ who has compiled a staggering resume while collecting belts at 118, 122 and 126 pounds. Cuellar vs. Mares is the latest in a lineup of action-oriented 126-pound showdowns assembled with the goal of unifying one of the sport’s most talent-laden divisions. It will be the fifth featherweight world championship of 2016 on SHOWTIME.

On Dec. 10, there also will be a long-awaited world championship contest between two undefeated 154-pound fighters. Jermall Charlo will make the third defense of his IBF Junior Middleweight World Championship against No. 1 mandatory challenger Julian Williams in a matchup of 26-year-old fighters at the top of their game. Charlo vs. Williams becomes the sixth title or world title eliminator in the 154-pound weight class in 2016 on SHOWTIME, a roster featuring eight of the top-10 fighters in the division.

Super middleweight world champions Badou Jack and James DeGale are set to unify the 168-pound class. Both champions retained their titles on a doubleheader last April 30 on SHOWTIME. Jack kept his WBC belt in a controversial draw with longtime titlist Lucian Bute that many thought Jack clearly won. Earlier that evening, DeGale successfully defended his IBF crown with a unanimous decision over mandated challenger Rogelio Medina. Jack landed 61 percent of his power punches, while DeGale connected on an astonishing 66 percent of his power shots. Now, Jack and DeGale will face off in a long-awaited unification to determine the No. 1 fighter in the super middleweight division.

The most anticipated rematch in boxing will take place when Carl Frampton and Leo Santa Cruz square off in an immediate rematch of a leading 2016 Fight of the Year candidate. In their first encounter July 30 on SHOWTIME, former super bantamweight champ Frampton moved up in weight to challenge fellow unbeaten Santa Cruz, edging the three-division titlist in a firefight. The must-see rematch will be the sixth featherweight world championship on SHOWTIME in less than 12 months.

The co-feature pits undefeated lightweights Dejan Zlaticanin against resurgent fan favorite Mikey Garcia. Zlaticanin is making the first defense of his WBC 135-pound crown against the former two-division titlist in Garcia. The champion is the No. 1 fighter at 135 pounds, while Garcia is aiming to become a three-division world champion in just his second fight back from a two-and-a-half year layoff.

Four-division world champion Adrien Broner will face the streaking Adrian Granados in a matchup of top-10 ranked 140-pound fighters. The flashy Broner, who has captured titles at 130, 135, 140 and 147 pounds, has scored two consecutive knockouts in the super lightweight division. The hard-charging, all-action Granados, who pulled a stunning upset of then-undefeated WBC No. 1 ranked super lightweight Amir Imam in a dominating performance last November on SHOWTIME, thrives in the underdog role and has a deceiving record – his four defeats, all via split or majority decision, have come against opponents with a cumulative record of 52-1.

Undefeated welterweight world champions Keith Thurman and Danny Garcia have been on a collision course for more than a year. Thurman has held a version of the WBA Welterweight World Championship since 2013 but announced his arrival in March 2015 with an emphatic win over Robert Guerrero. Thurman has since defended the title twice, including most recently against former world champion Shawn Porter in a potential Fight of the Year thriller in June on SHOWTIME CHAMPIONSHIP BOXING on CBS. Garcia, after conquering the 140-pound division, captured the WBC Welterweight World Championship with an impressive performance against Guerrero in January. Should Garcia defeat Samuel Vargas on Nov. 12 in a non-title fight, he and Thurman are set to meet in a marquee unification blockbuster between undefeated champions at the pinnacle of their careers. Garcia vs. Thurman will air live in Primetime on CBS or live on SHOWTIME.