Reformed bad boy Stuart Hall is defiant he can overcome his Nelson Mandela inspired world title challenger. Vusi Malinga, who takes on Hall this weekend at the First Direct Arena in Leeds, will use the memory of South Africa’s greatest icon, who passed away earlier this month, to help spur him to victory.

The pair clash live on BoxNation this weekend, concluding a great year for the channel, and the historic legacy of Mandela will act as an inspiration for the well-schooled Malinga.

“Mandela is a huge figure for the South African people,” said Malinga. “His struggle and battle represents something very special to everyone in the country and the rest of the world. His passing was a very sad occasion for South Africa but his legacy will run forever. There is great hope in his story and it will definitely be a huge inspiration for me come fight night – I want to do this for Mandela,” he said.

Malinga has had two previous challenges for the world title, against Japan’s Hozumi Hasegawa in 2009 where he lost by first round knockout, and Mexican sensation Leo Santa Cruz last year in which he lost a lopsided decision over twelve rounds.

The 34-year-old is extremely confident, though, that it will be third time lucky after claiming to have learned from those fights.

“My last world title fights I may have lost but I also gained from them. I was very young back then but now it’s my time and I feel ready and am raring to go.

“I have been in England for 6 weeks and have been taking this fight very serious. I’ve come to win and will finally fulfill my dream and become a world champion on Saturday – I have no doubts,” he said.

Hall, however, disagrees with Malinga’s assessment, and is sure that his dramatic turnaround from beach bum to world title champion will soon become a reality.

“I’ve totally changed my life around,” said Hall. “I was a young kid that was into the party lifestyle before – drinking, drugs, whatever. I was living out in Ibiza and really into that way of life but I realised if I wanted to do anything with my life I had to make a change – a big change. Thankfully I did, and now at this later stage, I’ve been given this chance and I’m not going to let it go,” he said.

“Malinga’s come up short at world title level in the past. He’s failed at the highest level before so that’s got to play on his mind. He was stopped the first time he fought for a belt and Leo Santa Cruz made easy work of him in his second challenge. His time has come and gone – now it’s up to me to grab this chance,” Hall declared.

Frankie Gavin and Paul McCloskey both make their ring return on the bill where they hope to cement their positions for a solid 2014. 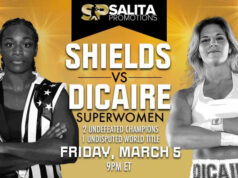