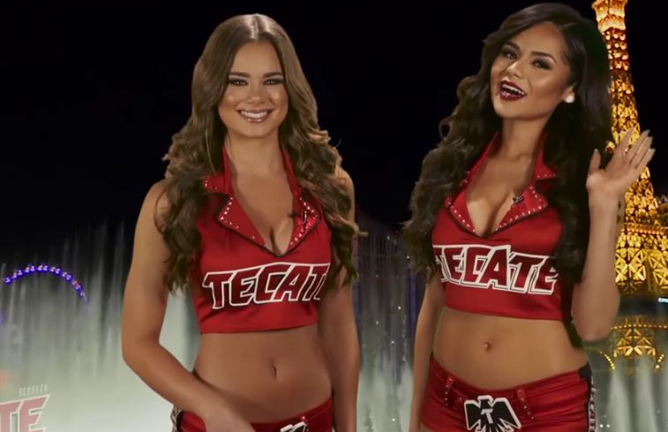 With less than a week to go before the Canelo vs. Khan Fight Week in Las Vegas officially begins on Monday, May 2, Tecate, the fight’s presenting and exclusive beer sponsor, is launching several digital activations to bring fans closer to the May 7 fight. Canelo Alvarez (46-1-1, 32 KOs) is set to face Amir “King” Khan (31-3, 19 KOs).

In February, Tecate, Golden Boy Promotions and Canelo Alvarez, announced they were partnering and would feature the prizefighter in the brand’s upcoming national English and Spanish advertising broadcast campaign which debuted on April 11.

Today, Tecate and Golden Boy Promotions are releasing the free Bold Punch iOS app which integrates fans 21+ into all the fight week activities starting on Monday, May 2 via live streams and virtually in the ring during fight night. The knockout app, demonstrated here by the Tecate Chicas, features five unique types of content for fight fans including, for the first time ever, the ability to feel one of Canelo’s power punches:

* Punches – Don’t just see the punches, feel them. Every time Canelo lands a bold punch, your phone will vibrate to reflect the bold intensity of the match.
* Behind-the-scenes-video – Live streams and exclusive pre-fight locker room content.
* See Fight – All of the ways to see the fight – from where to buy tickets to how to watch the fight live on HBO or in theaters via Fathom Events.
* Tecate – Check out the latest national television campaign featuring Canelo Alvarez and the brand’s iconic black eagle.
* Fighters – A quick tale of the tape that highlights the fighters’ important stats ahead of the fight.

“Tecate is synonymous with both legendary fights, and the experiences we create for consumers surrounding our partnerships,” said Felix Palau, Vice President of Tecate Brand Marketing. “Unlike past physical activations, our goal here is to leverage Canelo’s international star power, creating digital experiences that can be felt by the masses – whether you’re heading to Vegas or planning to enjoy the fight at home with friends.”

Starting Wednesday, April 27, Tecate is launching a dedicated Twitter promotion giving fans 21+ the opportunity to win their very own version of the WBC world championship belt by following @Tecate and clicking the button “#BoldestBeltSweeps” from the brand’s latest tweet featuring Canelo. By entering, users are agreeing to the promotion’s terms and conditions and a tweet is automatically generated, alerting their followers that they want to win the #BoldestBeltSweeps. Five winners will be announced by the Tecate Chicas through the brand’s Twitter live stream on Friday, May 6 before the fight’s 2:30 pm PDT weigh-in.

Additionally, Tecate is offering fight fans one more way to get closer to the match through a simple text-to-win sweepstakes. More than 150,000 have already entered for a chance to win four tickets to the fight plus a VIP boxing experience and other branded prizes since the sweepstakes opened seven weeks ago. The sweepstakes will close on April 30.

To date, Tecate’s promotion of Canelo vs. Khan includes a national English and Spanish advertising broadcast campaign featuring Canelo in ‘Flashy’; the popular, national, no purchase necessary mail-in-rebate program; extensive media buys across Las Vegas from bus and building wraps to digital billboards; an aggressive national retail program across 6,000+ stores; and will be prominently featured on Canelo’s trunks and at the center ring, around the mat and throughout the arena.