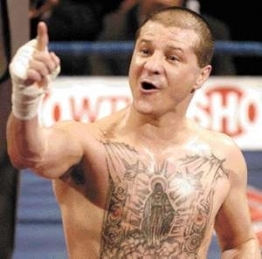 Former multi-division champ Johnny Tapia, 45, was found dead inside his Albuquerque home on Sunday. No foul play was immediately detected. This brings the end to one of the more unique and troubled lives in boxing–a sport filled with gut-wrenching tales.

In the late-80’s. my father finally caved and got cable-TV. One of my earliest memories of watching boxing on ESPN were of Johnny Tapia. It was the first time in my young life that I was able to definitively conclude that a guy would become champion. He was that good–a 115 pounder who was just a little different. His energy was off-the-charts. His punches thudded a little louder than any other fighters at that weight.

Tapia, along with Kid Akeem–another top 115-pounder and ESPN favorite, were going to bring some attention to the lower-weight classes. Both men are now dead.

But Tapia at least managed to fulfill much of his potential. The road was not an easy one. Just as he was coming into his own, he had to take off over 3 years due to his cocaine addiction. But those who thought the old Tapia was history were surprised when he resurfaced in 1994, flashing that old form.

Tapia ran off a long-unbeaten streak. He snagged the WBO 115-pound title and made a bunch of defenses. It culminated in a 1997 all-New Mexico battle against Danny Romero. Tapia schooled his ballyhooed opponent–his energy, will, and passion allowing him to win a unanimous decision.

He moved up to 118 and won another belt, before Paulie Ayala narrowly decisioned him to take his title. Before the Ayala fight, Tapia was unbeaten in 48 bouts–quite a testament considering what he had gone through. If he had kept his nose clean, that number would be closer to 60.

It was up and down from there. He lost the return to Ayala–the second hairline decision he lost to him. He would later win the IBF Featherweight Title from Manuel Medina in 2002, then lose it to Marco Antonio Barrera in his first defense in his last big fight.

Since then, most of the news about Tapia was bad. There was a nearly-fatal cocaine overdose in 2007, fighting into his 40’s, and other unpromising tidbits of information trickling in from New Mexico. Those who cared about him had hoped his comeback in the early-90‘s would give way to more tempered Johnny Tapia. But that just wasn’t him.

His nickname “La Vida Loca” was no hyperbole. He saw his mother murdered at childhood. How many drugs would we need to distance ourselves from that horror? Tapia was surely hellish to care for and love. But it was hard to be mad at him. He seemed like a good guy at heart. But he was a messed-up kid who could never turn the corner.

So this passing is not necessarily shocking. It’s just that we’ve seen him soldier through so much stuff before. The ridiculous amounts of blow, the tragedies, the torment, and he always pulled through. But on Sunday, his number came up. And anyone who knew him or followed his career would be hard-pressed to say they seriously expected him to grow old. That he made it to 45 is quite a feat. Most of us would have been goners long ago.

Earlier this year, I saw Johnny working the corner of a fighter on Solo Boxeo. He looked pale and bloated. I don’t profess to be Dr. Drew, but I remember thinking he didn’t look very good. I thought that maybe with his own fight career, he was able to keep his life somewhat together, but now he was more or less free to dance with his demons. And that’s what it looked like to me.

It’s difficult to put this into proper perspective. On one hand, he is at peace. The craziness is over. But it’s just hard to not feel rotten about this. It was impossible to not like him as a fighter or feel at least a little fondness for a guy who seemed better as a person than what the headlines might have made you think.

It’s just hard to not be sad about this. When a fighter had such an irrepressible fighting spirit in the ring, you’d like to think they can transfer that to regular everyday life. But nothing Tapia faced in the ring gave him anywhere as much trouble as the pitfalls he faced outside of it. But for those who watched him, his memory will live forever. He was simply unforgettable.