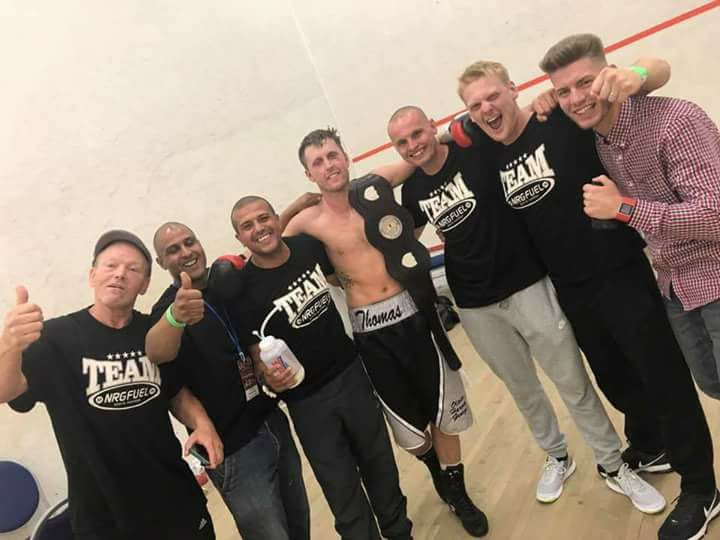 Underdog Richard Thomas (5-1) upset the odds to stop favourite Daniel Slaney (8-2-1) in the sixth round of their Central Area title clash on June 10th at Doncaster Dome on a Stefy Bull Promotions show.

It was a local derby with Slaney, 32, from Harworth and Bircotes and Thomas, 31, living in the village just next door called Tickhill.

It was Thomas who threw the fight’s first meaningful punches, starting with the jab to find his range in the opening seconds, he then threw a right to the body to set up a left-right combination that rocked Slaney off balance into the corner where he held on for dear life for the following 20 seconds. He recovered but spent the remainder of what was a long round for him holding on, stunned.

Thomas was the livelier and more aggressive of the two from the opening bell, forcing the action. He rocked Slaney’s head this way and that with straight left and rights to the head. The southpaw was not fully recovered from the right hand that previously stunned him and could only return fire with his back to the ropes, but landed a lovely left hand at the midway mark that almost took Thomas’s head off, but it was just one successful shot compared to his opponent’s many, who out-landed him at least five to one in the opener.

Slaney finished the round with some good inside work, managing to land the left uppercut repeatedly during clinches, but only in the final 20 seconds when it was all too little too late.

Slaney bucked his ideas up in the second segment and took the fight to Thomas. The three minutes were largely spent in holds which suited Slaney more. However, it was an even round, neither fighter giving up any ground.

Incentivised, Slaney began the third round by being the first to the punch, much sharper and quicker on his toes than before, committing to combinations for the first time in the fight. He also outboxed Thomas on the inside, who was looking for the one big shot again. He found it on the midway mark with a jaw-breaking overhand right that Slaney took well.

A laboured right hook that swiped the air above Slaney’s ducked head in the final 10 seconds would certainly have awarded Thomas a ticking off in the corner in-between rounds.

In a seemingly even fourth round, Slaney threw successful one-twos but caught a rocking right hand in return on the midway mark that clearly got him in trouble. Thomas sensed his opponent was hurt so steamed in to capitalise but the southpaw recovered well and stood his ground, fighting fire with fire.

The scorecards were relatively even going into the fifth section. Slaney tried to adopt his jab more to keep Thomas away and was the busiest of the pair in the first half of the round. His inside work was also better than Thomas’s but, once again, got caught flush and looked hurt. Thomas, with a clever feint, landed a strong jab to snap Slaney’s head back with one minute of the round remaining. Despite being the most telling punch of the round, it still wasn’t enough to swing it completely his way.

Slaney started the sixth round as the more energetic and livelier boxer, bouncing around on his toes until a short right hand from Thomas during an exchange sent him crashing through the ropes.

He looked unsteady on his feet as he took the eight-count from referee John Latham but immediately put up his gloves ready to continue.

Slaney attempted to hold on to recover his senses but a left hook that brushed the back of his head and a follow up right hand on the chin left him staggering around the ring on shaky legs, resulting in the official giving a standing eight-count and consequently calling an early end to the fight when not convinced he could continue, with 1:31 on the clock in the sixth round.

Slaney always appeared to be surviving for large parts of the scheduled 10-round contest despite having the ability to outbox his counterpart but Thomas had the power – moving up to three KO’s from five victories – and the far better game plan on the night to win the fight.

Manager Joe Elfidh commented, “They underestimated him and he gave it his all. So many people told me, naming no names, that he didn’t have a chance of winning that title, and I don’t know if anyone has ever won an Area title in their sixth fight before.

“He was in the away corner but sold a few tickets anyway, being a Doncaster boy. He’s a pleasure to work with and I don’t think anyone from Tickhill has ever achieved this before.

“He’s hardworking in the gym and never says no to any fight, he’s not bothered about boxing in the away corner, he’s so naturally heavy-handed with both hands.

What’s next for Richard is that he likes being up against it so we’ll look for a big name next.”