When I went online on Sunday morning, the first thing to greet me was a Yahoo! Sports story about Derek Chisora’s controversial stoppage of Malik Scott. The headline was sensational, but the actual event was anti-climactic. The only sensational thing I saw was the headline itself, or other claims that Chisora had won the WBO championship, both obviously the result of the ignorance of general sportswriters regarding professional boxing.

The seasoned boxing observer should look upon what happened in the Wembley Arena as noteworthy, but hardly shocking. Dodgy boxing results are sadly commonplace, and the discretion given to the referee is deciding a fight by TKO are at the root of many of them. When viewed against the backdrop of the most controversial TKOs in boxing history, waving off Malik Scott at the 9-count is almost unremarkable. 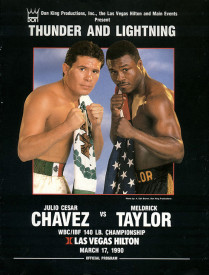 1. Julio Cesar Chavez vs. Meldrick Taylor I (1990): This fight easily ranks among the most controversial fight results of all time. Taylor was ahead on points going into the 12th and final round, when a crushing right put him on the canvas. Despite Taylor getting up at the count of 5 and with only two seconds to go to the final bell, referee Richard Steele waved him off and declared the result a TKO12 in favor of Chavez.

On the one hand, Steele has always maintained that he was concerned first and foremost with Taylor’s safety, and medical examinations conducted after the fight prove just how badly beaten up Taylor was. On the other, Steele could not have been unaware that the fight was just seconds from the final bell, and Taylor almost certainly would have lasted those final seconds, the terrible damage already done to him. The right or wrong of that call continue to stand among boxing’s great ongoing debates.

2. Emile Griffith vs. Benny Paret III (1962): This TKO is controversial because the referee clearly waited too long to stop the fight. Paret took a terrible 12th Round beating leading up to the eventual TKO, one in which he was essentially helpless for minutes. Paret would fall into a coma almost immediately after the fight, and die a week and a half later.

3. Oliver McCall vs. Lennox Lewis (1994): Oliver McCall nailed Lewis and put him on the canvas in the 2nd. Although clearly stunned, most observers agree Lewis should have been allowed to continue, as there is quite a difference between getting your bell rung and getting hurt. Most observers feel Lewis should have been allowed a chance to pull it together, since he had taken no real damage at that point in the fight, and certainly referee José Guadalupe García has been more forgiving in the years since.

At a time when the WBA and IBF belts were in the hands of Riddick Bowe and Evander Holyfield, McCall’s victory gave the WBC strap to Don King. At the time or now, few thought that was a mere coincidence.

4. Lucas Matthysse vs. Vivian Harris (2010): The referee, Gelasio Perez Huerta, was simply awful. Although Matthysse was wearing Harris down with a vicious body attack, Harris was doing well enough to have closed the Argentine slugger’s eye. Matthysse landed a blow in the 4th that snapped Harris’s head back, but failed to really hurt him. Even so, Huerta stepping, yanked Harris’s mouthpiece out, and stopped the fight. Who can say where this bout might have gone had Huerta not stepped in with an utterly groundless, fraudulent TKO?

5. James Toney vs. Hasim Rahman II (2008): What made this fight so controversial was the see-saw of technicalities over the result. Rahman could not continue after an accidental clash of heads cut and closed Rahman’s left eye. However, technically the fight was stopped because Rahman said he could not continue, and not because of the doctor’s determination, which under California state rules meant the result was a TKO3 and not a NC3. Rahman protested bitterly, and despite the ruling having precedent and being a reasonable one in California, the CSAC overturned the referee’s call and changed the ruling from a TKO to a NC.