As the middleweight torch has been passed to Miguel Cotto, there is a new kingpin at 160 pounds. While most boxing observers think Gennady Golovkin is the premier 160-pounder in the business, Cotto’s claim is dent-proof, as he is the legitimate Middleweight Champion of the World beyond dispute. How much of a championship impact he makes in the middleweight division remains to be seen.

Going back 25 years puts us smack dab in the middle of 1989. You might remember it well. Ronald Reagan was still president. The New Kids on the Block were on top of the charts. Riots were breaking out in China’s Tiananmen Square. Seinfeld was set to premiere. Since that time, a lot of good and even great middleweights have come along. Let’s look at the top five:

No surprise here. Hopkins was one of the more preeminent middleweight kings in history, reigning for a decade. Some of his early work as champion lacked significant meaning, as Hopkins was dominant, but against less-than-compelling competition. But even that part of Hopkins’ legacy is underrated, as not all of his early challengers were resume-filler. And it wasn’t the Hopkins we see today, who overwhelms opponents mentally. This version of Hopkins mowed guys down.

In the last several years of Hopkins’ reign, he added some big names to his ledger, starting with an upset TKO over 40-0 Felix Trinidad and a one-shot knockout of Oscar De La Hoya. He also unified the belts. When he did lose, it was one of the more unconvincing title-losing defeats of a champion of his stature, when he was edged by Jermain Taylor. Almost 20 years after winning his first belt, Hopkins remains a factor today at light heavyweight.

If only he rose to the top a little earlier, but becoming champion at 35 doesn’t bode for that long of a reign. Even so, he reigned supreme for 4 years–not bad by any stretch. His win over Kelly Pavlik for the title was a big moment for the Argentine star. His first defense was Martinez at his most fearsome. As an underdog, he reversed a disputed loss and flattened highly-regarded Paul Williams in a middleweight defense that was just as, if not more violent than, Tony Zale crushing Rocky Graziano or Marvin Hagler flattening Tommy Hearns.

Martinez was dominant against unbeaten Sergei Dzinziruk, scoring a knockout over the 154-pound champ in 8 rounds. A pair of 11th-round knockouts over Darren Barker and Matthew Macklin followed. And for 11 rounds, he completely schooled unbeaten Julio Cesar Chavez, Jr., before falling apart and nearly getting stopped in the final round.

A difficult and close 2013 defense against Martin Murray further suggested Martinez was nearing the end, which came in his next fight against Miguel Cotto, who stopped him after 9 rounds. Still, it was good reign for a late-blooming fighter who achieved greatness when most fighters are winding down or retired.

A lot of people forget how good of a middleweight champion Michael Nunn was. Unbeaten at 36-0, he had run roughshod over a good middleweight division, but was forced to take on guys like Toney while the real big names in the sport refused to fight him. Toney came back from a huge point-deficit against the smooth-boxing Nunn to starch the champion in the 11th round.

Toney’s reign would be inconsistent, with weight issues constantly playing a role. He nearly lost to Dave Tiberi and many think he did. He edged the very capable Reggie Johnson and fought a tough draw with Hall of Famer and supreme technician Mike McCallum, before beating him the following year. Toney would really hit his stride at 168, where he became so dominant that many ranked him as the top fighter in the world.

Beating the top dog certainly boosts his case, as he won a clear decision over Hopkins in ’93 while nursing an injury. His overall championship work at 160 is pretty thin and he never won the legitimate title at this weight. Still, this was the division where fans first got to see one of boxing’s greatest-ever talents at the world-class level. Before beating Hopkins, he whitewashed future belt-holder Jorge Castro. Against capable contender Thomas Tate, he was lethal, scoring a 2nd-round blast-out.

You can almost identify the Tate fight as Jones’ breakthrough on a professional level–sort of how some historians look at Ali’s win over Cleveland Williams as the precise moment Ali fully came into his own. As an underdog in his next fight, he would completely dominate James Toney, but that would come at 168 pounds.

When looking back on Taylor now, it’s hard to be overly-impressed. His career did flame out quite dramatically and he underachieved when he was champion, especially in fights against guys like Kassim Ouma and Cory Spinks, which were closer fights than they needed to be.

At the same time, this is a bottom-line business and he did beat Hopkins twice, the same Hopkins who is still a force to this very day. It had been a long time since Hopkins had tasted defeat and Taylor gets credit for two wins, however inconclusive they may have been. He didn’t really “beat” Hopkins by any true definition of the word, but it’s hard to remember a time before or since when B-Hop looked so ordinary and Taylor had a lot to do with that and he did it twice.

It turned out that greatness was just outside of Taylor’s grasp. He had an abundance of talent and was a robust package of skills in the ring, but unlike some champions, he seemed to actually recede after winning the title. Who can forget Emanuel Steward flipping out in his corner to get Taylor to move his hands against the undersized and underpowered Spinks? But two wins over Hopkins is hard to ignore and with the pickings kind of slim in this category, it’s good enough for the 5th spot.

John Hedges: Criticism & Punches, Taking it on the chin 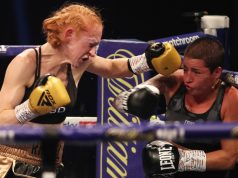 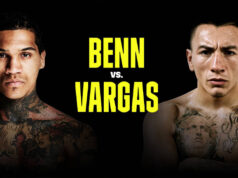