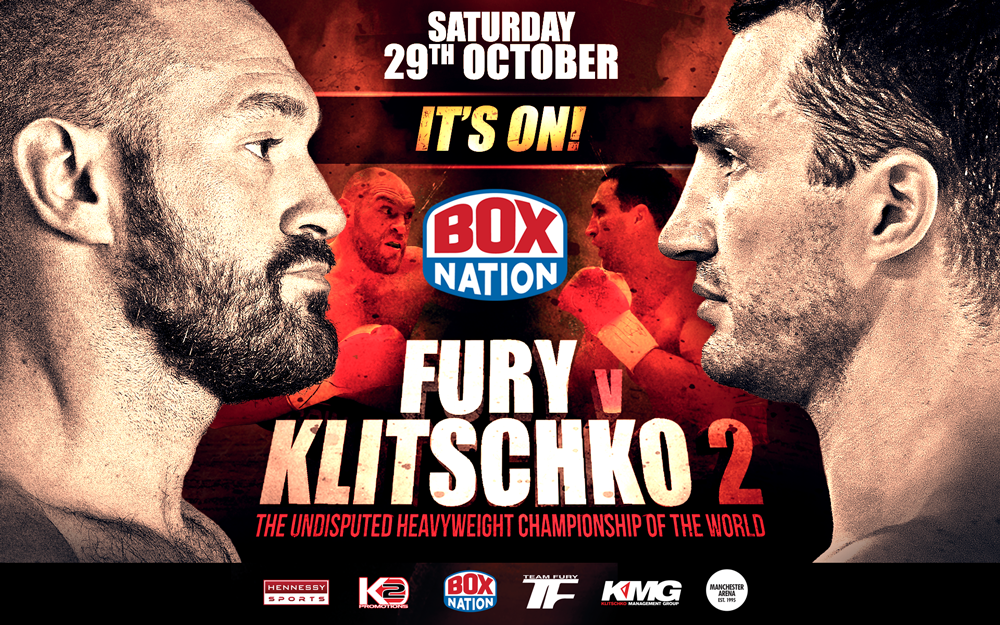 The giants of boxing collide again in the biggest and fiercest heavyweight rematch in recent memory. A bitter grudge match sees Fury finally make the first defense of the titles against the man he took them from in their first showdown.

Undefeated Fury (25-0 18KOs) shocked the sporting world last November when he sensationally dethroned long-reigning heavyweight icon Klitschko in one of boxing’s biggest ever upsets in recent years at the Esprit Arena in Dusseldorf, Germany.

Klitschko is gunning for revenge after suffering his first defeat in over 11 years at the hands of the Mancunian. ‘Dr Steelhammer’ (64-4 54 KOs) is determined to recapture his belts from Fury and take his place back at the top of the world heavyweight scene.

Peter Fury, uncle and trainer of Tyson Fury, said: “I’m delighted that we can finally get the fight back on and in Manchester on October 29th. After hard discussions we can now focus on giving the fans what they deserve; another barnburner of a fight. Team Fury will ensure Tyson is in the shape of his life to successfully retain his World Titles.”

Promoter Mick Hennessy, CEO of Hennessy Sports, said: “Everyone involved has worked tirelessly to get the world heavyweight title rematch between Tyson and Wladimir back-on and I’m thrilled that it’s now officially confirmed. This is the rematch that the boxing world has been waiting to see and the anticipation is now at boiling point so expect a highly charged and explosive fight when the best two heavyweights in the world collide. As Tyson’s promoter I have 100 percent confidence that he will retain his titles in front of his fans and make it another memorable night for British boxing to remember.”

Bernd Bonte of KMG said: “Team Klitschko is very happy, that after Fury`s postponements, we finally have a new date. It is great that our event can stay in the Manchester Arena. This is one of the best venues world-wide and has already seen many great fights. We know that Wladimir will be in the best shape on October 29th and we are very confident that he will regain the Heavyweight Championships.”

Frank Warren, Chairman of BoxNation, said: “I’m delighted that we can finally announce the rescheduled date for the REAL Heavyweight Championship of the World. Fury vs. Klitschko II is by far the biggest fight in Europe so far this year. The addition of the fight to the channel is another fantastic acquisition following on from the recent capture of the blockbuster showdowns between Khan vs. Canelo and Frampton vs. Leo Santa Cruz. This yet again shows our commitment to bringing the biggest and best fights to our BoxNation customers. The night promises to be one of the biggest events in the UK for years and I’m thrilled our channel will be there as Fury looks to cement his place as king of the heavyweight division.”

A press conference formally announcing the new fight date, involving Tyson Fury and Wladimir Klitschko, will take place on Monday 12th September in London – venue and time to be confirmed.

*Tickets purchased for the original Saturday 9th July event will be valid for entry at the Manchester Arena for the new date of Saturday 29th October. Remaining tickets will be available at www.eventim.co.uk. A further announcement regarding ticket sales will follow shortly*