It was the turn of the Heavyweights at Planet Ice in Altrincham to take part in the latest instalment of Ultimate Boxxer. This was the sixth staging of what is becoming a fast growing concept.

Chersey’s Nick Webb was the man that claimed the Golden Robe, and the lion’s share of £50,000 by coming through the field and overcoming Doncaster based Mark “Bad News” Bennett in the final. 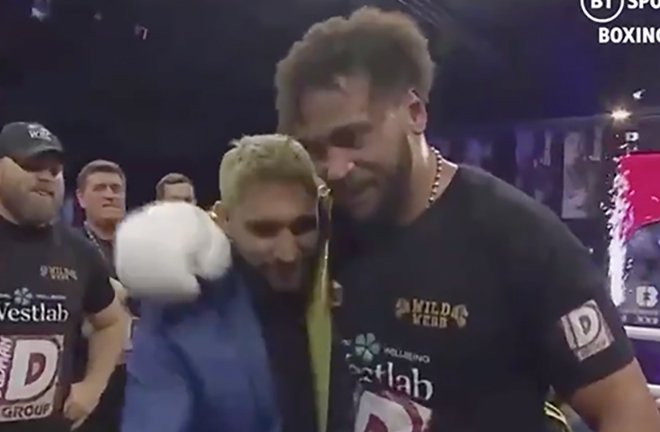 Webb began his evening in less that convincing fashion, defeating Chris Healey by split decision. Webb had previously stopped Healey back in January 2017, but didn’t have it all his own way this time against the hometown fighter. In the end he relied on the judges after three rounds, with two scores of 29-28 in his favour trumping a third verdict of the same score to Healey.

Webb’s semi final opponent was something of a surprise, with Danny Whittaker, 2-0 at the start of the competition, upsetting the more experienced Jonathan Palata by three scores of 29-28 in the quarter finals. Whittaker’s luck ran out in the last four though, as Webb used his experience to stop the Yorkshireman with seconds remaining in the opening round. A right uppercut followed by a crunching left hook dropped the hurt Whittaker, and as he tottered back to the ropes, the referee wisely called a halt to the contest.

Bennett had reached the final by first earning a split decision win against Glasgow’s colourful Jay McFarlane, and he then met another surprise package in the semi final in Halifax’s Josh Sandland, who upset many peoples pick for the tournament, Kamil Sokolowski in the last eight via unanimous decision.

Bennett and Sandland took part in what was the fight of the night. Bennett was well on top, with a cuffing right hand sending Sandland to the canvas at the end of the first. Bennett repeated the feat in the second, a short left hand dropping Sandland for a second time, leaving him with a mountain to climb. To his credit, he bravely tried to get back into the argument, with some thrilling action up to the final bell, but scores of 29-26 (twice) and 29-28 saw Bennett into the final.

Mark Bennett drops Sandland at the end of the first! #UlitmateBoxxer pic.twitter.com/qlf32OEcsq

It turned out to be the fresher Webb that would take the first prize, as he took advantage of a tiring Bennett to win every round in the final. Bennett did have his moments, wobbling Webb in the opening round, but was unable to keep the momentum going as Webb kept his opponent at bay with some smart boxing to stay out of range. Three scores of 30-27 saw Webb breathe new life into his career after big stoppage setbacks against Dave Allen and Kamil Sokolowski in the past eighteen months. He moves his record to 16-2 after his three straight wins on the night.

Webb will now hope to kick on back into English or British title class on the back of his big win.

Canelo: Saunders has had plenty of excuses, he has to fight on Saturday

Who is next for Chris Eubank Jr after beating Marcus Morrison?

Lee: Saunders punches harder than people think, I can see a...