Matchroom Boxing and OPI Since 1982 came together to delve into the Spanish Market, with a show staged in Barcelona.

A pair of European title fights were the main attractions, and one went the distance, while the other was over in the first round.

Martin’s counter punching proved pivotal, as he intelligently and frequently found the target.

Hughes attempted to employ his usual pressure tactics in the opening few rounds, but Martin was swiftly able to negate this offence with eye catching combination punching and accurate counter attacks. 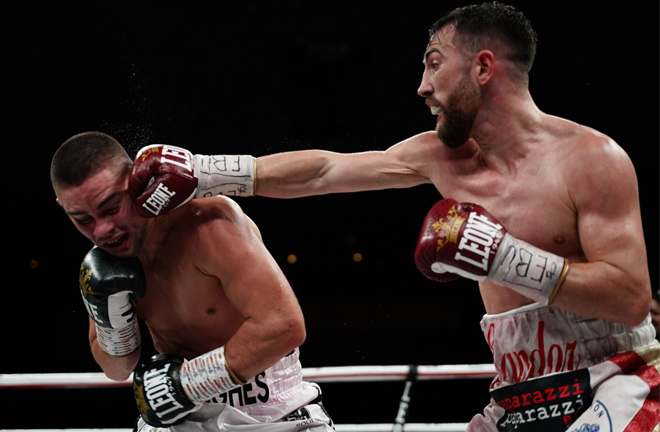 The home fighter had won the belt in July with a stoppage win over Andrea Scarpa, the same man that Hughes had beaten for the belt last year, and Martin never looked like relinquishing his grip on the title.

Despite a late rally from the challenger, as he aggressively looked for a late stoppage, Martin stayed out of trouble and the fight went to the cards.

Two scores of 119-109 and a third at 117-111 saw Martin comfortably retain and is an exciting addition to an already bustling ten stone division.

In the other European title fight, Newark based Russian, David Avanesyan made light work of Jose Del Rio, defending his European Welterweight title in just over two minutes.

Carl Greaves-trained Avanesyan was ruthless in his approach, and dismissive of a challenger with six defeats already on the slate.

🥊BRING ON KELLY!💥@DavidAvaBoxer set up an exciting encounter with @JOSHPBK after he stopped Jose Del Rio in the first round to retain his European title 💪

A big left hand left Del Rio tottering against the ropes, and Avanesyan poured on the pressure, sinking in body shots that were visibly hurting Del Rio. A wicked left to the midriff left the Spaniard on his haunches, unable to beat the referee’s count.

It was an impressive, no nonsense win for Avanesyan, who now waits for Sunderland’s Josh Kelly, who will appear on the Daniel Jacobs v Julio Cesar Chavez Junior bill later this month.

The pair were due to meet previously, but Kelly withdrew due to illness. Avanesyan is going from strength to strength after a pair of wins over Kerman Lajarraga and will be a massive danger man if the contest goes ahead as planned in 2020.