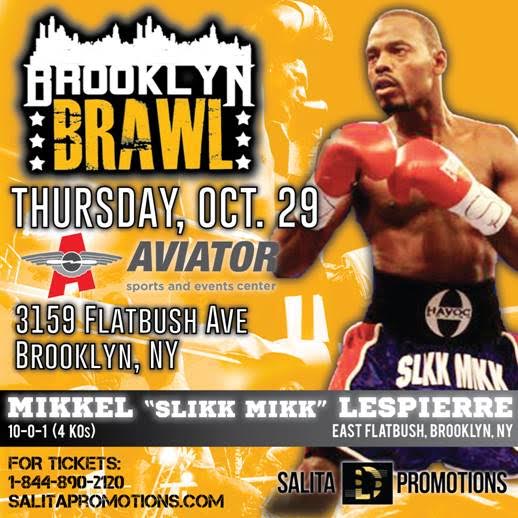 A heaping helping of local flavor was added to the Oct. 29 Brooklyn Brawl on Monday, as boxing promoter Dmitriy Salita announced that undefeated junior welterweight Mikkel “Slikk Mikk” Lespierre of East Flatbush signed on for the Aviator Sports and Events Center card. Lespierre, who has amassed a tremendous NYC following en route to an unbeaten 10-0-1 record (4 KOs), trains at the vaunted Gleason’s Gym beneath the Brooklyn and Manhattan Bridges and is always proud to represent the borough he has called home since his sixth birthday.

“Mikkel is a very talented fighter from right here in Brooklyn, N.Y. He has been impressive on the Brooklyn Brawl series from his previous appearances and I know he will come to put on a show Oct. 29 at Aviator in Brooklyn,” said Salita, the former IBF, WBA and NABA International Junior Welterweight Champion who fights out of Flatbush, Brooklyn, as a professional. “The Brooklyn Brawl series continues to be one of a kind, featuring many local boxers like Mikkel who have tremendous accomplishments inside the ring. This will be another outstanding card for area boxing fans to enjoy.”

Lespierre, who has posted five pro victories during the 2015 calendar year alone – with one TKO and four unanimous decisions, including his last pro bout on Aug. 14 at Prudential Center in Newark, N.J. – has signed on for a six-round Oct. 29 Brooklyn Brawl bout in the junior welterweight division. His opponent will be announced at a later date.

On Thursday, Oct. 29, the Aviator Sports and Events Center will serve as the next proving ground for many New York City-based rising stars – with the exciting undercards building toward featured events, where Alicia “Slick” Ashley and Christina McMahon will square off for the WBC Super Bantamweight title and top-10 world-ranked bantamweight contender, Nikolay Potapov, will make his U.S.A. debut.

Ashley (22-10-1, 4 KOs) – ranked second in her division by BoxRec and noted as one of the best pound-for-pound women’s battlers in the world – has the chance to put her Guinness World Record as the oldest female boxing champion in history further out of reach when she challenges undefeated Irish fighter and current Interim WBC Bantamweight champion Christina McMahon (7-0, 3 KOs). McMahon has compiled an unblemished slate since beginning her professional career in 2010 and will look to halt Ashley’s attempt at extending her Guinness mark – with the winner takes home the vacant WBC Super Bantamweight title.

Potapov (13-0, 6 KOs) – currently ranked as the No. 14 bantamweight in the world by the WBO and now rated No. 10 globally by BoxRec – will put his undefeated 13-0 record (6 KOs) on the line as he makes his debut on U.S. soil. The fast-rising battler piled up more than 180 amateur tilts and amassed a number of national and international tournament victories, and now as a 25-year-old pro has climbed quickly to challenge himself with four 10-round bouts and a 12-rounder against top competition. In his last pro victory, Popatov earned the WBA Asian title by beating Jason Canoy, who is rated No. 14 in the WBC and No. 12 in the IBF.

Welterweight prospect “Trigger” Tresean Wiggins (7-1, 6 KOs) – fresh off a third-round knockout at the Aug. 25 Brooklyn Brawl: Boxing At The Beach affair – will be back on the Aviator card. The fighting pride of Newburgh, N.Y., was impressive last month against Baltimore’s Kevin Womack Jr. and looks to add another stoppage victory to his burgeoning resume.

Undefeated junior lightweight contender Dimash Niyazov of Bensonhurst, Brooklyn, will have his mettle tested once again at the Aviator complex. The Brooklyn police officer, whose story was chronicled by the Wall Street Journal in August, improved to 8-0-3 (5 KOs) with a six-round Boxing At The Beach unanimous decision over local fighter Ariel “Fuego” Duran in a Brooklyn-Queens crosstown rivalry bout.

Detroit’s James Gordon Smith (8-0, 5 KOs) is another rising star putting his unblemished record to the test in Brooklyn. The eight-time Motor City Golden Gloves title-winner and former national amateur champion is intent on making a name for himself in the pro ranks.

A light welterweight and Olympian making his professional debut, Serdar Hudayberdiyev comes to the Brooklyn Brawl after an accomplished international amateur career. The pride of his native Turkmenistan on the West Coast of the Caspian Sea, he captured gold in the Asian games and was selected his country’s flag bearer in the 2012 Summer Olympics in London.

Heavyweight Emilio Salas (3-1-1, 1 KO) of Puerto Rico – who opened up the Boxing At The Beach slate with a second round TKO at the expense of opponent Glenn Thomas – will add some thunder to the Oct. 29 card while welterweight Giorgi “Goga” Gelashvili (2-0, 2 KOs) of Brighton Beach, Brooklyn, will provide the lightning. Gelashvili, a former three-time Georgian national champion, overwhelmed opponent DeLoren Gray-Jordon last August with a speedy salvo of blows in round two, leading to his second stoppage victory in as many fights and as many months.

A product of Corona, Queens, Edward Valdez was recently added to the upcoming Brooklyn Brawl slate. A veteran at 13-11-2 (10 KOs), Valdez will face Aik Shakhnazaryan (16-2, 7 KOs) of Samara, Russia, in an eight-round lightweight contest.

Anthony Fowler on Liam Smith: Could happen for a world title eliminator

‘Its been an incredible ride’ Luke Campbell reflects on career after...