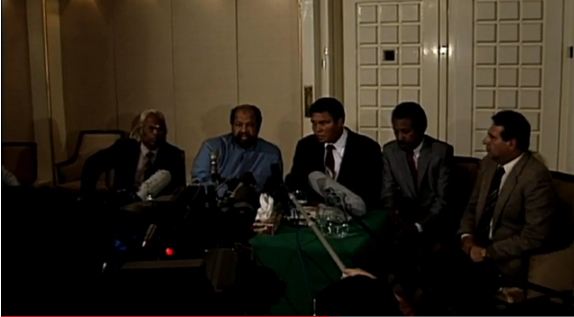 The next film in ESPN Films’ 30 for 30 Shorts series premieres today on Grantland.com.  Ali: The Mission, narrated by musician John Legend, delves into perhaps one of the most important, but least known, feats of Muhammad Ali’s remarkable life. In 1990, the boxing legend traveled to Iraq to press a plea for peace and negotiate with Saddam Hussein for the release of U.S. civilians taken hostage after Iraq’s invasion of Kuwait. You can watch the entire Muhammad ALI 30 for 30 documentary piece right here, as well as read more about the story from those involved. 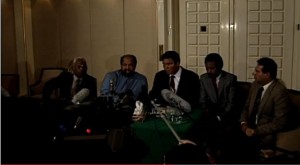 Ali risked his reputation, health and safety for the freedom of prisoners held by Hussein as “human shields” to deter U.S. military strikes.  On January 16, 1991, only six weeks after Ali brought 15 hostages back home to their relieved families, Operation Desert Storm bombarded Iraq.

“There are so many stories and myths out there about The Greatest, but this one struck a personal chord with me as I don’t know that people today are even aware of Ali’s immense philanthropic work or this specific mission to Iraq before Desert Storm began,” said the film’s narrator John Legend.

“Entertainers and athletes are often blessed with a platform from which to improve the world, and it was an honor for me to be the voice of this film showcasing the incredible journey Ali made that changed the lives of these hostages forever.”

In this 30 for 30 short, directed by Amani Martin (Benji, HBO’s Brooklyn Dodgers: The Ghosts of Flatbush), former hostages discuss their harrowing tales of captivity, their euphoria in being liberated, and their enduring gratitude to Ali for his selfless, humanitarian mission.  ESPN Films’ 30 for 30 Shorts series is artfully crafted by Blue Moon.

Previous films from the 30 for 30 Shorts series include Arnold’s Blueprint, The Arnold Palmer and Jake, which can all be viewed on Grantland.com.

I think this Ali documentary from the 30 for 30 Shorts series and Grantland is really interesting, and I wasn’t aware of Ali’s journey to Iraq. Ali also encounters health issues over there, as he runs out of his Parkinson’s medication, and you see a lot of behind the scenes footage of the whole ordeal.

There’s also a couple of very poignant quotes from Ali, such as when he talks about how he needed publicity for his fights or his movies, but he doesn’t need publicity for helping people. And how the hostages he helped to rescue don’t owe him anything. Very cool, so enjoy watching it right here!