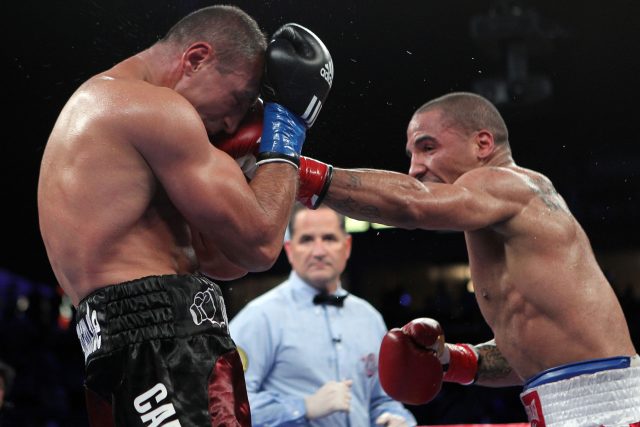 Ward (24-0, 13 KOs) will face the winner of the June 4 Super Six Semifinal on SHOWTIME between World Boxing Council (WBC) super middleweight champion Carl “The Cobra” Froch (27-1, 20 KOs) and former world champion Glen “The Road Warrior” Johnson (51-14-2, 35 KOs) of Miami, Fla., for the right to fight for the Super Six title and 168-pound world supremacy sometime in the fall.

Fighting outside the comfortable confines of Oakland, Calif., for the first time in 20 months spanning three fights, Ward defended his WBA belt for the third time in what Showtime expert analyst Al Bernstein called one of Ward’s “most complete wins he’s ever had in his career.”

A boisterous crowd cheered both for the Californian Ward and Abraham, backed by hundreds of loud Armenian fans from Southern California. “Arthur Abraham was strong and very determined,” Ward said. “He had passionate fans and he didn’t want to lose in front of them. I’m going to stay humble and keep working hard. I want to be champion for a long time and take the least amount of punishment possible.”

Abraham (32-2, 26 KOs), of Berlin, Germany, by way of Armenia, lost for the third straight time but vowed after the fight that he would remain in the talent-rich super middleweight division.

“I started well and thought I was doing OK for the first three rounds,” said Abraham, the former International Boxing Federation (IBF) middleweight world champion. “He never hurt me and I was blocking all his punches. But then I cramped up when I was trying for the knockout and I couldn’t do it.

“I gave it my all and fought really hard and will stay at super middleweight.”

Ward seemed to get stronger and stronger as the fight went on while Abraham looked visibly tired towards the end of the fight, absorbing Ward’s hard body shots and a variety of assorted jabs and uppercuts.

“My trainer says that I’m the type of fighter to make adjustments and that’s what I did,” said Ward, who threw 289 jabs during the fight, landing 178 of his 444 total punches. “I wish the refs would have let me fight on the inside – that’s what we trained for. But we made adjustments and got the victory. After a hard hit, I would go back to my corner and I would do two things: I would listen to my corner and talk to myself and I would say, ‘Bite down and fight back.’ “

Ward will be intently watching on June 4 in Atlantic City, N.J. “I’ll fight Johnson or Froch, but I think the public wants to see Froch-Ward,” he said.

Chris Arreola turned in an impressive performance against Nagy Aguilera, stopping him in the third round.