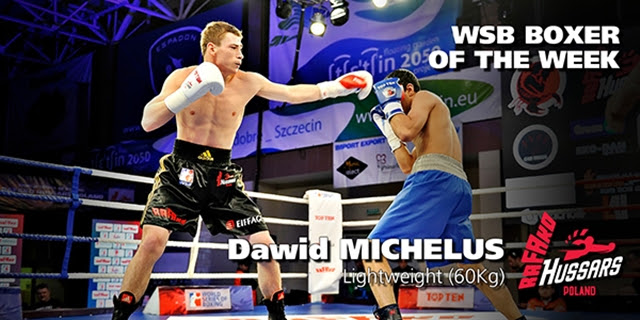 Boxer of the week – Dawid Michelus

Rafako Hussars Poland may have suffered a 3-2 defeat against their rivals the Russian Boxing Team in Week 3 of WSB Season VI at the weekend, but the performance of their top lightweight Dawid Michelus still gave the crowd plenty to cheer in Szczecin.

At just 22, the youngster has already amassed close to 60 international bouts making him one of the most experienced members of the Hussars squad, and his skill shone through from the opening exchanges against Russian Boxing Team’s Gabil Mamedov. Holding off a spirited fightback in the second round, Michelus then assumed control of the bout, bringing his team to a 2-0 lead they couldn’t quite convert into an overall victory on the night.

Born in 1993, Michelus began his boxing career at the age of 10, becoming Polish National Junior Champion in 2008. Travelling to the 2010 AIBA Youth World Boxing Championships in Baku few expected him to have an impact on the tournament, but in defeating Mongolia’s Tugstsogt Nyambayar and taking the bronze medal, the young Pole stamped his mark on the sport.

Following another international bronze, this time at the 2010 Youth Olympic Games in Singapore, Michelus was drafted in to the Polish squad for WSB Season III, defeating several big names including Algeria’s Mohamed Flissi in an impressive debut campaign. Still proving his value to the Hussars in Season VI, the lightweight star now has 15 WSB international matches under his belt and a glittering career very much still ahead of him.

Team of the Week

Cuba Domadores laid down the gauntlet with impressive win over Turkiye Conquerors in Istanbul earning the title of Team of the Week 3 in the process.

Punch of the Week

As Week 3 of WSB unfolded, Ukraine Otamans and Cuba Domadores had a perfect start of their Season in the competition, while Argentina Condors achieved a sensational 3-2 win over Caciques Venezuela and Russian Boxing Team performed a rousing comeback to beat Rafako Hussars Poland in Szczecin.
WATCH NOW