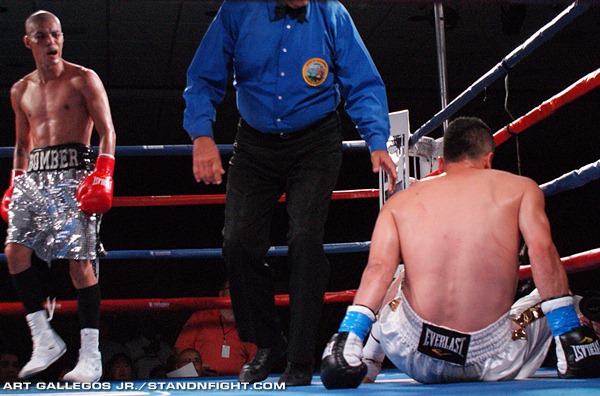 This past Friday night at the Doubletree Hotel in Ontario, Calif., Mexico born super featherweight prospect, Aalan Martinez (13-1-1, 9 KOs), extended on his knockout streak, scoring a 7th round TKO against hometown hero, Ramon Valadez (11-2, 6 KOs). This was the 4th knockout in a row for the Boxing 360 promoted fighter, who now looks to fight for a regional title before the end of the year. 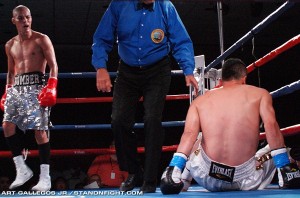 “I knew I wasn’t going to get a decision against Valadez fighting him in his backyard with his promoter as the lead, Martinez said, “I was determined to get him out of there and that’s exactly what I did.  I started to break him down early with hard punches and when I dropped him in the 7th round, I knew he was hurt and wouldn’t continue.  They made the right decision by not letting Valadez carry on, because he was only going to take more punishment.”

“This was a huge win for Martinez,” said Boxing 360 promoter Mario Yagobi. “With this victory, Aalan puts himself in a great position to challenge anyone with a regional title.  I’ve been in communication with some of the sanctioning organizations and it seems likely that we’ll be able to get him a shot before the end of the year.”

“I’ve been working extremely hard in the gym since I suffered my first loss,” Martinez continued. “The adjustments my trainer and I have made are making a difference and it’s shown in my last four fights, all of which have come by knockout.  My promoter Boxing 360 is telling me to be ready for a big fight.  Hopefully I can reschedule a fight Rances Barthelemy (16-0, 11 KOs), who I was supposed to fight on Shobox last month, but had to pull out because I hurt my hand.  Now that I’m a 100% healthy, I’m ready for anyone.”