Kell Brook returned to his FlyDSA Arena fortress in his native Sheffield, and dominated the overmatched American, Mark DeLuca In a seventh round knockout win.

The victory ensured Brook picked up the vacant WBO Intercontinental Super Welterweight belt, a ranking builder that now puts him on course with a former holder of the full WBO title in Liverpool’s Liam Smith.

Brook looked pensive and nervous during his ring walk to the familiar strains of Kanye West’s All of the Lights, but was strictly business when the first bell sounded.

It was a patient beginning, with “Special K” landing a short left on the ropes and a nice three punch combination, but he was forced to take a shot from the visitor right on the bell.

Kell was warming to his task, and, after another measured round in the second, the third saw Brook land a well timed uppercut, splitting the Massachusetts’ man’s nose on impact.

It got worse for DeLuca in the wake round, as Brook scored a knockdown, with two huge lefts and a big right forcing “The Bazooka” to the canvas.

DeLuca bravely survived, but it was one way traffic. Rounds four and five saw Brook teeing off at will, and although the American fired back, the shots had no effect on the former Welterweight World champion.

💥 BROOK BLASTS OUT DELUCA! 💥@SpecialKBrook is back! A huge left hand in the 7th seals it for the ‘Special One’ pic.twitter.com/XKyeWO9VN6

A bloodied DeLuca was taking a hammering, and round six saw Brook land a series of uppercuts that were sapping his opponents energy and the end was nigh. The finish duly arrived in the very next round, with Brook in full attack mode and DeLuca in survival mode, Brook connected with what looked like a well timed stiff left jab that crumpled DeLuca, forcing the referee’s intervention as he bravely tried to rise.

READ: THE PROBOXING FANS VERDICT: WHAT’S NEXT FOR KELL BROOK

Harper began will behind an impressive jab, and also landed some eye catching combinations to take the first couple of rounds. Keeping the fight at range was working well for the 23 year old Harper, but Wahlstrom did have successes in the third and fourth, and a decent nip and tuck fifth made it a decent argument going into the second half of the contest. 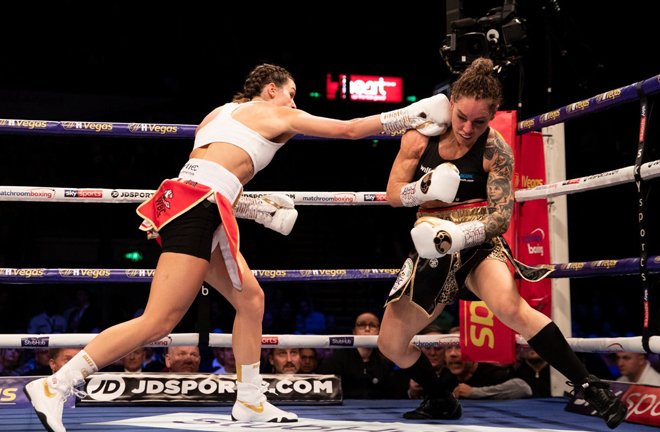 The Finn started to show signs of unravelling though from the sixth, with blood pouring from a cut, and the seventh saw the dream in sight for Harper, as she decked Wahlstrom with a right hand that the WBC queen protested to no avail. “Belter” Harper backed this up in round eight, staggering Wahlstrom with two left hands on the bell. Harper stayed cautious in the ninth and in the final round she finished like a true champion, firing shots until the bell sounded to ensure victory.

The result was wider than the fight reflected, but two scores of 99-90 and one at 98-91 confirmed Harper as Britain’s first female WBC champion.

Kid Galahad booked a return shot at the IBF Featherweight title with an impressive win against Claudio Marrero, whose corner pulled him out before the start of the ninth session.

Galahad was unfortunate to not get the nod against Josh Warrington last summer, but shook that disappointment off with a final eliminator win in Sheffield.

It was a frantic start, with Galahad landing the cleaner shots, but the Domenican was growing in confidence, letting his own shots go in bursts. The first few rounds were closely fought, with both giving and taking punches. By the fifth, Galahad’s jab was coming into play more and more and was largely controlling the action. The sixth was a cagey affair, but round seven was a real breakthrough for Galahad as he put together his work impressively, landing good combinations in one-twos with rapid lefts finding the mark, and wobbling the visitor in a big round. Marrero was still in there fighting in the eighth, but his face was marked and Galahad was firmly in charge. 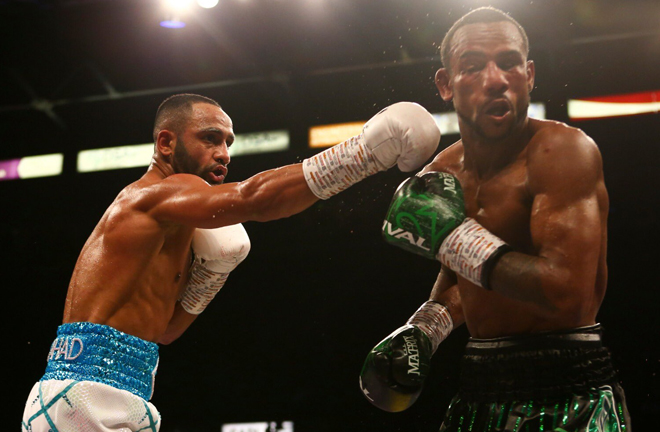 So much so that on returning to his corner, Marrero’s team had decided to save their man for another day, retiring him from the action before the beginning of the ninth to book Galahad a second World title tilt.

Elsewhere on the card, the ever popular Dave Allen returned to action with a routine win over Dorian Darch.

After two rounds of no action to speak of, Allen decided to close the show, with a left hand buzzing the Welshman and a follow up left to the body dropping Darch. He bravely rose, but another short left to the head staggered him, and another body assault had Darch on the canvas, where he sat out the count. 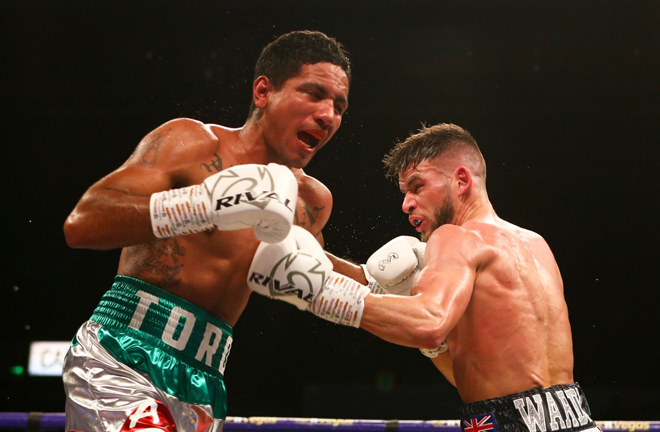 Ward boxes beautifully in patches, and frustrated Amparan with his movement and skill. A right to the body dropped Amparan in the seventh, and he was dropped with a left to his mid section in the final round as Ward took a 100-88 verdict on referee Howard Foster’s card.

In early undercard action, John Docherty blasted out Pablo Mendoza in a round, Donte Dixon stopped Eduardo Valverde in the fourth and final round, and Callum Beardow took a 40-36 win against Pawel Martyniuk.