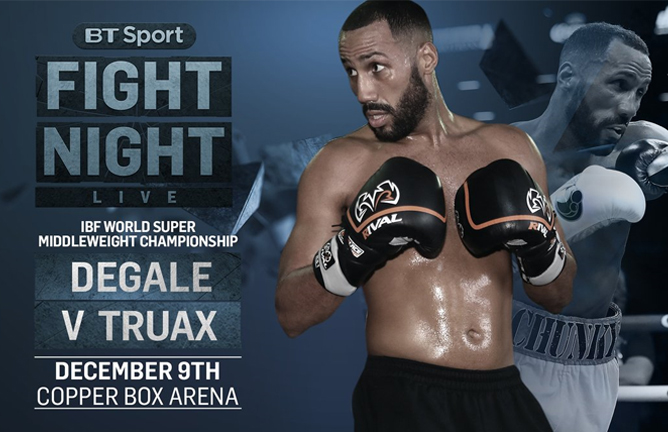 James DeGale will make his fourth defence of his IBF Super Middleweight title against American Caleb Truax at London’s Copper Box Arena on the 9th December 2017.

Degale, 31, hasn’t fought since he took on Badou Jack in January in a unification bout which ended in a draw. The 31 year old injured his right shoulder and had surgery after the fight. DeGale also hasn’t fought in the UK for three years

Caleb Truax, 34, took on Daniel Jacobs back in 2015 for the WBA World Middleweight title but lost via TKO and also fought Anthony Dirrell in 2016, again a loss via TKO. Since the loss to Dirrell, Truax has won his last two fights via KO and TKO. The American has 18 KO’s from 28 wins though has never fought outside of the US.

DeGale spoke of his opponent ahead of the fight. “Truax is a good solid fighter with a top pedigree. He’s been in with some quality opponents like Daniel Jacobs, Jermain Taylor and Andre Dirrell.”

“He’ll be fighting away from home so he’s going to bring it on and try to take my world title, but I’m the best super-middleweight in the world and I’m going into the ring full of confidence and 100% fit.”

“I’ve not boxed in London for a few years so I can’t wait to make my return to the ring and soak up the atmosphere from the crowd and put on great show for the fans.”