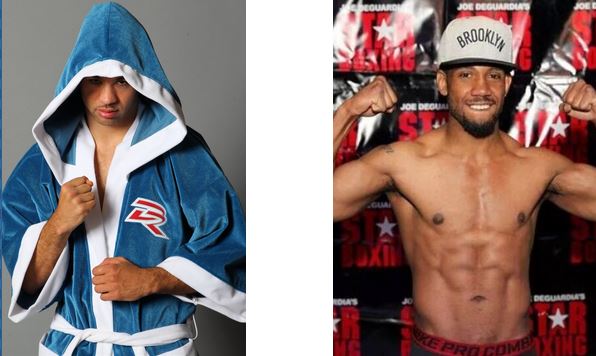 Joe DeGuardia’s Star Boxing returns to The Mohegan Sun Arena on Thursday, May 11th. Headlining the card will be local favorite Delvin Rodriguez (28-8-4, 16KO’s) Danbury, CT taking on spoiler Courtney Pennington (10-4-1 5KO’s) Brooklyn, NY in a 10 round Jr. Middleweight match up. Pennington earned the right to fight Rodriguez by securing two huge back to back upset victories over highly regarded favorites.

Rodriguez is no stranger to Mohegan Sun having fought there as recently as last July (23rd) when he battled Shawn Cameron over the 10 round distance and came away with the unanimous decision in a thrilling fight. Delvin has fought many elite fighters in his career including Miguel Cotto, Erislandy Lara, and Austin Trout and is hoping for one more shot at glory. This will be Delvin’s 8th appearance at the Mohegan Sun Arena.

Courtney Pennington is coming off 2 impressive upset victories, both on the road, knocking out Boyd Melson (15-2, 1KO’s) and winning a clear-cut decision victory over Khiary Gray Pitts (14-2, 11KO’s) in his last fight on Feb. 4th of this year. Pennington is an all action fighter and he knows a win over Delvin Rodriguez will have a huge impact on his career.

Promoter Joe DeGuardia had this to say about the main event “Once again Delvin steps into the ring at the Mohegan Sun against a very dangerous opponent who is coming off 2 huge upset wins and looks to make Delvin the 3rd. This will be a terrific fight as was Delvin’s last fight here against Shawn Cameron. I look forward to this fight and seeng who comes out on top come May 11th”.