Anthony Joshua ensured it was revenge and not repeat, as he regained the WBA (Super) IBF, WBO and IBO World Heavyweight titles, putting on a composed boxing display to widely outscore Andy Ruiz in Diriyah, Saudi Arabia

Ruiz Jr took centre ring early, with Joshua looking to keep things long off the jab in a measured opening for the Briton.

A right hand at the end of the round detonated off Ruiz, cutting the champion’s left eye on impact.

A stiff double jab at the start of round two scored for Ruiz, but Joshua fired back, a left hand finding the mark with Ruiz’ face showing signs of damage so early in the contest.

A clash of heads brought a cut to Joshua’s left eye, but the Watford man was controlling the distance and the action with measured footwork and speed.

The third again saw Joshua on his toes, showing good movement and landing lovely left jabs to frustrate the Mexican. Joshua was now in a groove, keeping Ruiz at bay with a long distance, but the unified champion was slowly closing this gap, managing to land a right hand that seemed to stiffen Joshua’s legs momentarily at the end of round four. 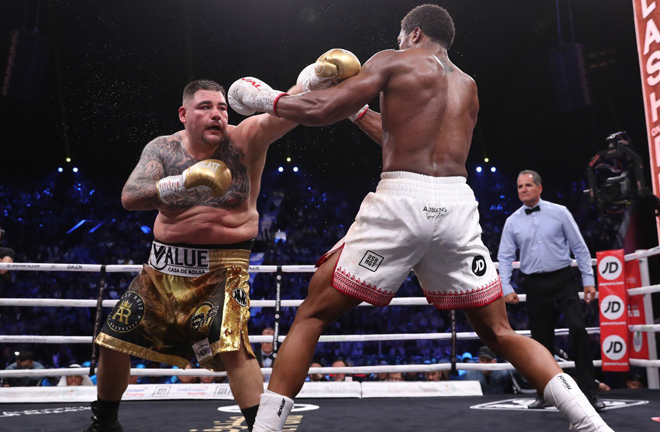 The fifth was a quiet affair apart from a decent right hand landing from Joshua, whose jab also remained a potent weapon.

Joshua kept busy in the sixth, and a short left hand caught Ruiz coming in. Ruiz showed frustration by hitting Joshua on the back of the head during a clinch.

The Brit could sense that his opponent was tiring, and began to plant his feet more in the seventh, looking to land more spiteful shots.

Ruiz though was still in there pitching and the eighth saw him land three right hooks to the body. He continued his assault with heavy hands, but Joshua learned from his mistakes in their original meeting by getting back to his boxing rather than electing to exchange. Ruiz though again poured on the pressure, with a left hand finding the mark. 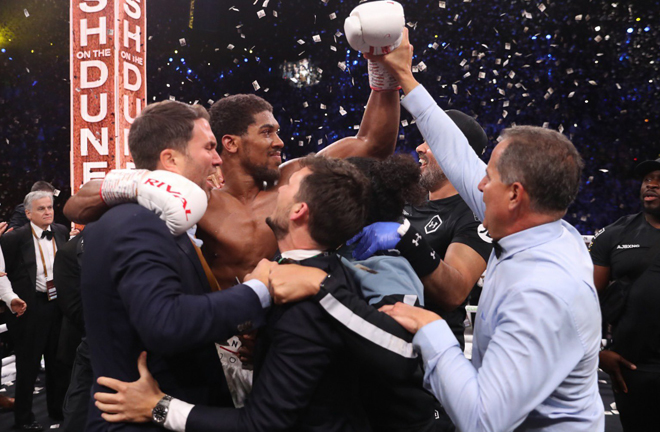 A left uppercut landed for “AJ” in round nine, but back came Ruiz with a hard right hand just as the challenger was looking to hold.

The tenth was again fought at range for Joshua, who was comfortably keeping Ruiz at bay.

Things were now at desperation point for Ruiz and he continued to be frustrated by the superior boxing skills of Joshua in the penultimate round.

Going into the final session, the two touched gloves and a Joshua right hand landed flush on a tired Ruiz. Joshua stayed out of harms way, and smiled towards the end of the contest as he knew his belts were on the way back to him.

Anthony Joshua says both fighters deserve respect after tonight’s clash and the two of them are keen for #JoshuaRuiz3! 🔥 pic.twitter.com/hAdgZsm5Lv

Glenn Feldman and Benoit Rosseau saw the contest 118-110, with Steve Gray awarding the contest to Joshua by a 119-109 margin, as a jubilant Joshua saw the four belts draped over his arms once again.

There was much mutual respect in the aftermath, with Joshua admitting he had learned from his past mistakes, adopting a hit and not get hit policy.

The pumped up new champion even suggested a third meeting, which Ruiz seemed very much on board with. The dethroned champion admitted he didn’t prepare properly for the rematch, and that he would be fully prepared if a trilogy match came along.

🗣”It was his night, I don’t think I prepared how I should’ve.”

All eyes now will turn to the 2020 rematch between Deontay Wilder and Tyson Fury as the heavyweight landscape again took another turn.