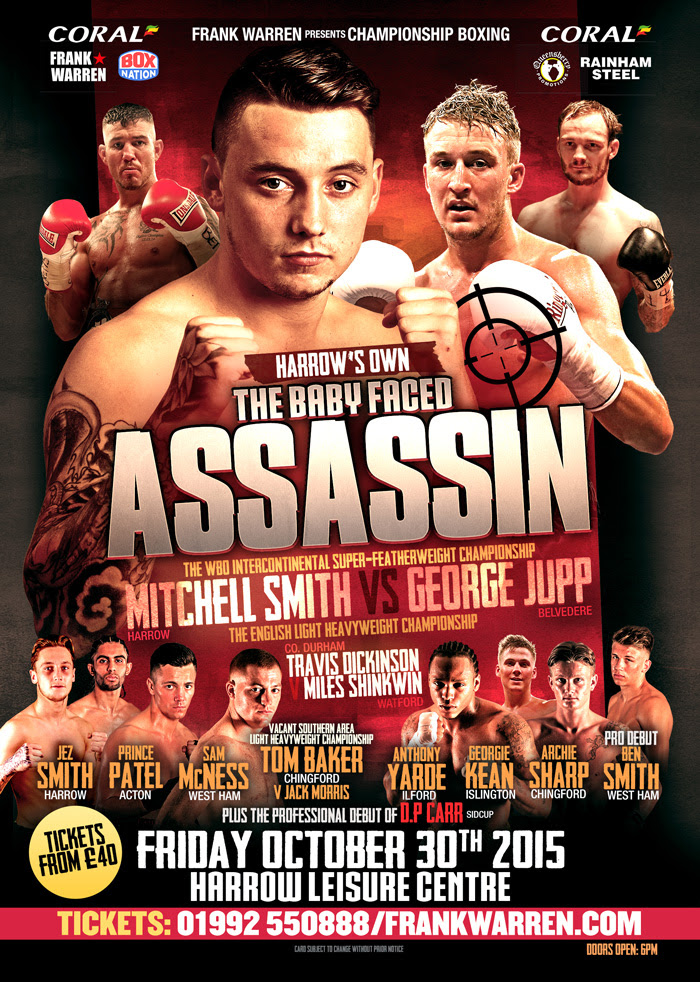 Mitchell Smith is relishing his ‘homecoming’ at Harrow Leisure Centre on Friday October 30th when he headlines a show for the first time. The unbeaten ace from Harrow Weald makes the second defense of the title against George Jupp and is looking to put on a stunning performance in front of his home fans.

Mitchell was in sensational form last month when he destroyed Dennis Tubieron inside one round with an explosive right hand to the Filipino’s body and broke his rib. The win sent out a firm message seeing that Tubieron faced Josh Warrington in the fight before Mitchell and went the full twelve round distance.

Now the 22-year-old hot shot, ranked number eight in the WBO, aims to do a similar job on Jupp before moving forward on the world scene.

“It’s fantastic to be fighting in Harrow for the first time and giving my family and friends a great night of action,” Said Mitchell.

“The venue is on my front doorstep and it’s also the first boxing gym I walked into and started training at so it’s nice top a show back where I started,”

“Like Tubieron, I’ll be looking to do a statement against Jupp. I can’t see him offering me a challenge though. We’ve sparred before and I’ll be 100 percent switched on and focussed on him. I’ll still be working my ass off in training because I know that he’ll be trying to take away what I have and what I’m going to achieve.”

“I know a lot about Jupp and he knows a lot about me. He’s a got a jab, but that’s about all. He’s going to be running scared on the night and there’s only so long you can run, I’ve got great distance and timing and I’m going to catch him either in the first or the second and when I do lets see how he reacts,”

“Of course I’m very happy with the performance last time against Tubieron and the way I ended it, that’s in the past now and I won’t just settle with that as I’m always looking for ways to improve and better myself. I’m very heavy handed and know the damage that I can do with my punches as you’ll see against Jupp.”

Jupp, the Southern Area Champion, from Belvedere, South East London, disputes Smith’s comments and says he’ll come out the winner of the clash.

“I’ll let him Smith run his mouth off as he does enough talking for pair of us, but I’ll be closing his mouth on the night,” Said Jupp.

“We both know that it’s going to be a tough fight, I’ve spared with him a long time ago and Mitchell is a good fighter. I’m not walking into this blind, we’ve both come on a lot since we sparred and it wasn’t as one sided as he’s making out. In fact he’s deluded!”

“He’s not as heavy-handed as he thinks he is. The punch he did Tubieron wouldn’t have knocked me out. He’s fighting a real super-featherweight now and lets see if can do the same. We’ve been on each other’s radar for while now, but one things for sure I’m coming out the winner.”

It’s a big night for the Smith family with Mitchell’s younger brother Jez, 21, fighting on the undercard – the first time the brothers have fought on the same card together as amateur or pro.

The unbeaten welterweight is 3-0 with two KO’s and is developing into an exciting prospect like his older sibling.

Mitchell added, “It’s also going to be a great night for my brother Jez who fights on Frank Warren’s show for the first time. He’s a fantastic prospect and one to watch out for. The tickets are great value for money as you get two Smiths, double the action, double the knockouts and double the entertainment for the price of one ticket!”

Promoter Frank Warren said, “I’m really excited with Mitchell and his development to date. He’s a fantastic fighter who reminds of a young Naseem Hamed. He’s exciting, he likes to thrill fans, he’s got flair, fast hands and explosive punching power, there’s no fear in him and he feeds off the buzz of the crowd. I really can’t wait to see him in action in the new season ahead.”