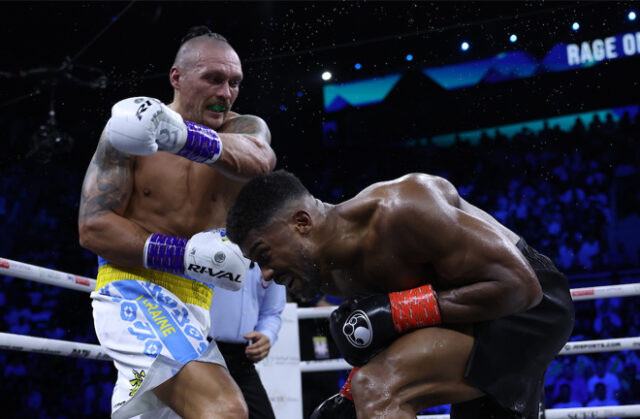 Oleksandr Usyk retained his WBA (Super), IBF, WBO and IBO heavyweight titles, and added the Ring Magazine belt with a split decision win over Anthony Joshua in their rematch in Jeddah, Saudi Arabia.

Their original meeting took place in September last year, and Usyk stunned most with the ease of how he took a points win at the Tottenham Hotspur Stadium, hurting Joshua on several occasions. Usyk had previously come up in weight after cleaning out the cruiserweight division, while Joshua had lost and regained belts before, and it was a must-win occasion for the Briton, who had enlisted the help of a new trainer in Robert Garcia.

It was a cagey opening, with Usyk (20-0, KO13) finding smart angles, and possibly shading the first round, and Joshua (24-3, KO22) wasn’t expending too much energy. Joshua did land a decent right in the second, but Usyk’s movement and jab was causing the former champion problems. The Ukrainian was taking centre ring, and Joshua was finding his man hard to pin down, although he landed with a right hand in the third. After a give and take fourth, Joshua focused on the body of Usyk in round five, and they looked to have an effect, although the champion still found success on the counter.

Joshua was applying steady pressure, and there was more good body work in the sixth, but Usyk remained calm and classy as ever, responding with shots to he body of his own. The speed of foot and hand from Usyk was seemingly winning the day, but again Joshua landed to the body in the eighth on more than one occasion that got the attention of the 35-year-old. Joshua was having more and more success, and had Usyk disorientated in the ninth, and went for broke, but Usyk again moved away from trouble, and saw out the session. Usyk responded in kind, beginning the tenth in superb style with several clean shots landing, but a massive counter right found a home for the former champion, in what was a gruelling frame for him as combinations rained in. Another body shot troubled Usyk in the penultimate round, but he shook it off, and rattled off more flashy and accurate shots that Joshua couldn’t get out of the way of. The Londoner went for glory in the final frame, but was understandably tired, and couldn’t achieve the knockout that he desperately needed as the fight went the distance.

Joshua was extremely agitated after the bout, and threw belts out of the ring, before taking to the mic to to congratulate his opposition.

The chief support also came at heavyweight, and in a thriller, Filip Hrgovic (15-0, KO12) took a contentious points win against Zhilei Zhang (24-1-1, KO19) in an IBF heavyweight title final eliminator.

A chopping right hand dropped the Croatian in the opening frame, and Zhang wobbled Hrgovic at the end of the fifth, and also gave him a torrid sixth round. Hrgovic stuck in there, and had his successes, but by the end of the ninth he was weary, and under heavy pressure. Hrgovic found a second wind though, and he unleashed a volley of combinations to head and body in round ten that hurt Zhang, but he bizarrely walked away at regular intervals, and showed a lack of interest. Both men were exhausted by the conclusion, and an absorbing fight went to the cards.

The WBC title eliminator at light heavyweight  went the way of Callum Smith (29-1, KO20), and he overcame a slow start to knock out Mathieu Bauderlique (21-2, KO12).

A counter left hand dropped the Frenchman in the fourth, and the same shot was delivered with much more power on the resumption, and this time it crumpled Bauderlique, and a halt was swiftly called.

Former two-weight world champion Badou Jack (27-3-3, KO16) was in action, and the Swede was extremely fortunate to be awarded a ten round split decision at cruiserweight to Richard Rivera (21-1, KO16).

Jack looked a faded version of his former self, and was out-hustled for most of the contest, although he did have a strong eighth, that lasted an astonishing four minutes, as he hurt a tiring Rivera. Jack did finish well, but it looked as though Rivera had done more than enough to win, but two scores of 96-94 for Jack trumped one at the same tally for Rivera.

Ben Whitaker (2-0, KO1) had his second professional fight after striking Silver at the Tokyo Olympics last year, and the light heavyweight banked six rounds in a wide points win against Petar Nosic (6-1, KO3). Whitaker stopped Nosic inside a round in the amateur code, but the Croatian gave a good account of himself, before going down 60-54 and 59-55 (twice) on the scorecards.

Ramla Ali (7-1, KO2) and Crystal Garcia Nova (10-3, KO10) made history as the first two female fighters to box professionally in Saudi Arabia, and Ali wasted little time in halting the Dominican in less than a round of their super bantamweight contest. A big right hand sent Nova’s gum shield flying, and a body shot ended matters.

Former cruiserweight world title challenger Andrew Tabiti (20-1, KO16) made a winning debut at heavyweight, and the American scored retirement win after the fifth round against James Wilson (7-1-1, KO6). Wilson was tired and wobbly during the fifth, and a sustained body attack had him on the deck. With his energy draining, Wilson’s corner pulled him out of action at the end of the frame.

Ziyad Almaayouf (1-0, KO1) delighted his home fans, as the super lightweight took a first round knockout win against Jose Alatorre (0-1). The pair traded from the off, but a hard right hand dropped Alatorre, and shortly after the resumption, he was dropped again by the same shot, and the fight was stopped.

Bader Samreen (6-0, KO5) extended his unbeaten record, stopping Fuad Tarverdi (5-3, KO4) in the fourth and final round of their lightweight contest.