Ivan Hope Price, better known as ‘Hopey’ has the world at his feet and after a stellar amateur career, Price finds himself on the big stage in Saudi Arabia on the biggest boxing show of the year.

On the evening the world will be watching Anthony Joshua seeking revenge against Andy Ruiz Jr, Hopey Price will be facing Swedi Mohamed just a few hours prior to the main event. Mohamed comes into the fight with a record of 12-6-2 and will be looking to bounce back after three losses on the bounce.

Price will be looking to impress as he will have the pressure of the whole world watching him as he looks to improve his perfect record to 2-0.

Price is no stranger to the big stage on a different continent as he claimed a gold medal at the Youth Olympic Games last year in Buenos Aires as Team GB brought back three gold medals, Caroline Dubois, sister of British heavyweight champion, Daniel and Karol Itauma collecting the others. Hopey beat Hichem Maouche of Algeria and Dean Clancy of Ireland to get to the final.

The challenge in the final was overcoming Sarawut Sukthet of Thailand, Price did just that by stopping Sukthet inside a round. Hopey’s gold medal was the first ever boxing gold medal won by Team GB at the Youth Olympic Games.

‘Drago’ will be looking to break his opponent on Saturday night and he has the right team around him with Eddie Hearn promoting him and David Coldwell guiding him from his corner and with this backing, the 19-year-old is looking forward to his professional career.

“I had a good amateur career but now it’s time for the professionals,” Price exclusively told Pro Boxing Fans.

“I wouldn’t want to be with any other promoter, any other trainer or any other shows than Matchroom’s. This is where I’m meant to be!” 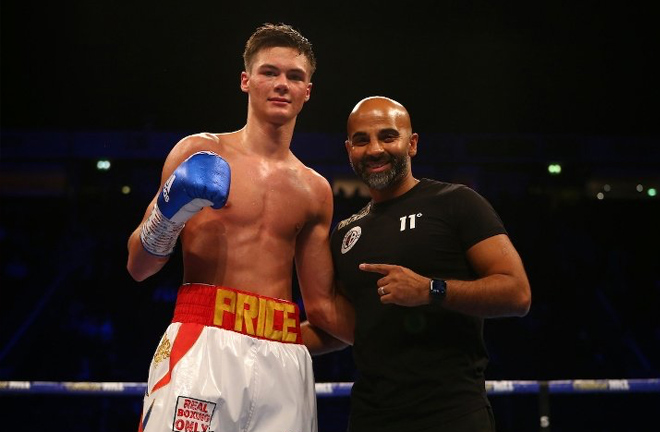 Hopey is training in Rotherham with the Coldwell camp and has adjusted to his new surroundings across Yorkshire from his home in Leeds.

And the amateur star has lofty ambitions, aiming to hit the heights of two of the best in the sport, Vasyl Lomachenko and Oleksandr Usyk one day.

“When Lomachenko and Usyk were nineteen they won exactly the same as I did as amateurs,” Price continued.

“So I believe if I listen to Dave [Coldwell] and hopefully progress to their level and I can get to where they’ve got.

“They were in my shoes at one point so I’ve got to look at it like that.”

Not short of confidence, Hopey Price has the belief he has what it takes to reach the top of the sport and he is our one to watch!