Now Richard Commey vs Jackson Marinez has been elevated to the main event with the rest of the show to still proceed.We last saw Richard Commey (29-3, KO26) in December 2019, when Teofimo Lopez ruthlessly ripped his IBF Lightweight belt from him inside two rounds.

The Brooklyn-based Ghanaian returns from a 14 month layoff to take on Dominican, Jackson Marinez (19-1, KO7), who himself is coming off a loss, over ten rounds. 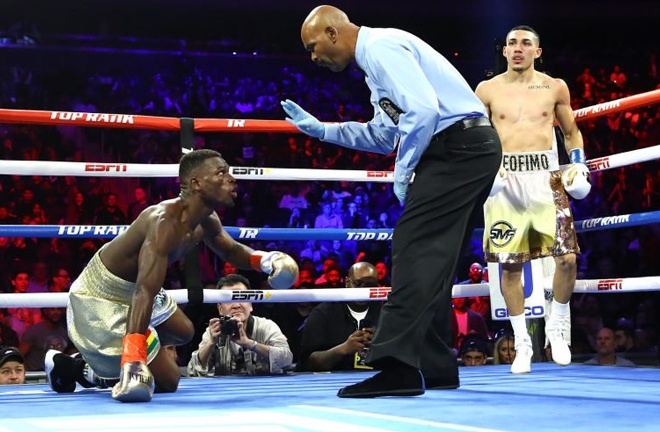 Commey was beaten in two rounds by Teofimo Lopez. Photo Credit: Mikey Williams / Top RankMarinez dropped a decision in a bid for the Interim WBA belt against Rolando Romero in August 2020, and will look to climb the rankings once more.

Commey has a high knockout success rate though, and he can halt Marinez before halfway in this one.

Both men have lost to Oscar Valdez, Lopez was stopped in seven after dropping Valdez in the second of their November 2019 meeting, while Sanchez was dropped and widely outscored in June of the same year.

Lopez has slightly the better seasoning, and I favour him to take a close points verdict.

Heavyweight hope, Jared Anderson (7-0, KO7) looks to make it eight straight knockouts, and he can halt Kingsley Ibeh (5-1-1, KO4), who held Guido Vianello to a draw last time out, inside schedule of their six rounder.

There are debuts for Las Vegas Bantamweight, Floyd Diaz who takes on Fernando Macias (1-1, KO0), and for Troy Isley, who meets Bryant Costello (1-1, KO1) at Middleweight.

It should be simple enough four round wins for the pair.

At Middleweight, Carlos Adames (18-1, KO14) returns after his first professional loss in November 2019, and he takes part in an eight rounder against an opponent to be confirmed.